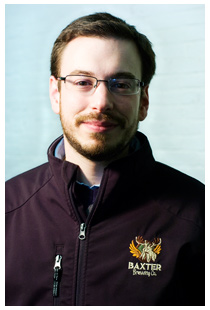 The 27 year old, honored in the Food & Wine category, launched the Lewiston, ME based brewery in January of this year and is cranking out beer at a phenomenal rate.

Livingston and his 10-person team at Baxter will produce 5,040 barrels of beer this year, more than industry giant New Belgium did in its first year in business.

“It’s pretty mind boggling and totally overwhelming,” said Livingston about the recognition. “It’s great to have my name attached to this but if it weren’t for all of the other people involved, my idea would still just be an idea.”

Livingston said the brewery plans to continue its growth in 2012 and he hopes they will enter the New Hampshire and Vermont markets.

“There is nowhere to go but up,” he said. “We are going to be managing our growth because we certainly don’t want to spread ourselves to thin.”

Livingston said fans can expect a new rotating seasonal lineup as well as expanded distribution across the entire state of Massachusetts next year.

Also recognized by Forbes were craft brewers James Watt and Martin Dickie, the Co-Founders of BrewDog in Scotland.