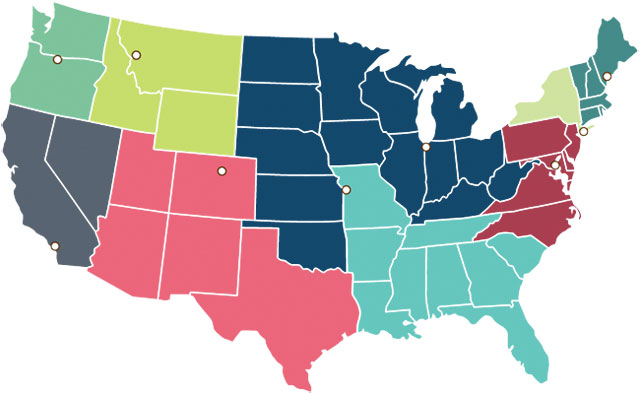 BOSTON – Confused what to carry? With hundreds of emerging breweries, local brewpubs, even first-run “pro-sumer” beer hitting the market, who wouldn’t be. That’s why we at Brewbound assembled this geographic guide to some of the most significant regional breweries out there. If you’re a retailer or distributor looking to get into the craft beer game, use this as the starting point for your portfolio, and no matter where you are, you can’t go wrong.(This article also ran in Beverage Spectrum Magazine’s March 2011 issue)

Established: Sierra Nevada: On November 15th, 1980, Ken Grossman brewed the first batch of Sierra Nevada Pale Ale, a beer that has since become the benchmark for the style. While the ‘Pale Ale’ is the workhorse behind the number two craft brewery in the U.S., it is Sierra Nevada’s attention to detail and constant innovation that makes them an ‘established’ Regional brewery.

Growing: Stone Brewing Co.’s Motto, “Fizzy Yellow beer is for wussies,” speaks to their passion for craft beer. They are expanding into Europe and have become one of the better distributed craft beers inside the U.S and out.

On the Verge: The Bruery. About as special as they come, The Bruery’s quality ingredients are their defining feature. Even if it means hand-roasting yams for their “Autumn Maple,” seasonal release, they will stop at nothing to make unique beer.

Established: Deschutes: Choosing an established brewery in the Northwest is a bit like choosing the best place to get pizza in Italy. With such a rich history of craft brewing in Oregon and Washington, picking the most ‘established’ brewery is tough. In the end, Deschutes is our winner because of their production level, their quality and their independent fame.

Growing: Full Sail: Aside from making some of the better special releases in all of craft beer, Full Sail is 100 percent employee-owned, making this brewery one of the best to work for!

On the Verge: Ninkasi — Though small in production, they are big on flavor, particularly their Total Domination IPA and Tricerahops Double IPA. Maybe they have the goddess to which they derive their name from on their side.

Established: Dogfish Head: If Time Magazine did the ‘Person of the Year’ award for craft brewing, Dogfish Founder Sam Calagione would have been the hands down winner in 2010. Not only did he grow Dogfish Head in annual production, he also opened a restaurant in Manhattan, began working on the second edition of his book, and inked a deal with Discovery Channel for a T.V. show, Brew Masters.

Growing: Victory- Clean and Crisp beers in every style make this brewing company one of the most drinkable. Special Release beers like Dark Intrigue also make them unique!

On the Verge: Stillwater Artisinal Ales — The fact that its distribution has grown to nearly 20 states gives this brewery plenty of chance to catch fire!

New England (Samuel Adams was excluded in this report based on their widespread availability):

Established: Harpoon: You would be pretty hard-pressed to find a bar or restaurant in Massachusetts that doesn’t have at least one tap dedicated to Harpoon. Like so many other craft breweries that sprang up in the 80’s, Harpoon has built a following of drinkers who regularly choose their suds on Sunday. Due to offerings like their IPA and UFO, and by virtue of being a top 10 brewery based on production volume, Harpoon earns the ‘established’ title in the NE region.

Growing: Shipyard — Though a bit smaller in production compared to Harpoon, they are just as well known. Good distribution to the opposite coast makes them ‘in-demand.’

On the Verge: Peak Organic — 49 percent growth over last year and perhaps some of the best quality organic suds you can find makes this brewery’s Black IPA and Simcoe Spring, ‘must try’ beers.

Established: Grand Teton: With so many great craft breweries on the coasts, it’s easy to forget about the mountain states. But Grand Teton Brewing Co. has been brewing quality beer since 1988. Their wares, particularly Bitch Creek ESB and Black Cauldron, are creative, well recognized and consistent. Founder Charlie Otto is also credited for resurrecting the modern Growler.

Growing: Big Sky Brewing Co. — This brewery has good distribution for their size. Though not available on the east coast, We can’t imagine consumers wouldn’t want to buy beers with names like Trout Slayer and Moose Drool.

On the Verge: Laughing Dog. Don’t be fooled by the cute labels- this beer is for real. Alpha Dog and DogZilla are must-buys.

Growing: Oskar Blues — Pioneers in the ’can revolution,’ these guys not only know how to make some good suds, they also care about our environment. We suggest G’Knight and Dale’s Pale Ale.

On the Verge: Avery Brewing — Historic art branded with a signature ‘A’ makes this beer stand out on the shelves, but the beer inside is just as creative! Try the White Rascal.

Established: Bell’s Brewery, established in 1985, falls just outside of the top ten in production volume. Constantly innovating with numerous seasonal and special releases gives Bell’s the feel of a brewing company that is on the verge, but consistent quality has led to the distribution numbers to compete with some of the more established breweries in the U.S.

On the Verge: 3 Floyds — Taking a page out of Willy Wonka’s book, this brewery has managed to create year round buzz for ‘Dark Lord Day.’ Golden tickets are sold for the opportunity to buy a set allotment of their limited release Russian Imperial Stout.

Established: F.X. Matt Brewing (Saranac): When you open your doors in 1888, and can rank in the top 10 of production volume in 2010, you are truly established. The Ithaca, NY brewery has produced 30 beers in the Saranac line and also distributes popular soft drinks.

Growing: Brooklyn Brewery — Brooklyn lager might be their staple (and one of the top selling in New York City), but special releases like ‘Black Ops’ make Brooklyn brewery just plain cool.

On the Verge: Brewery Ommegang — They produce Belgian Style ales that are authentically crafted. Hennepin, a Belgian Saison, pairs well with just about any meal.

Established: Boulevard: Another top-ten brewery in production volume, Boulevard has grown to be Missouri’s largest craft brewery by created quality brews in the traditional styles as well as special selections in the Smokestack Series. Cork-top bottling and elegant labeling are just two of Boulevard’s outstanding qualities.

Growing: Abita — Abita, the maker of ‘Purple Haze’ is a classic brewing Company in the heart of Louisiana. These brews are a must for any Cajun-themed bar or restaurant.

On the Verge: Cigar City. Unique hand-crafted selections like Guava Grove set this brewery apart. Collaborations, attention to detail and innovation are the defining characteristics of their recent success.