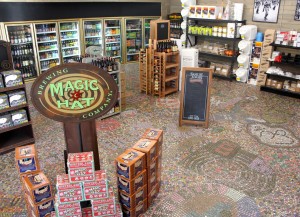 Craft Beer Cartel’s pièce de résistance is their bottlecap floor that was hand assembled by Riverside regulars, beer geeks, home brewers, friends, family, and beer reps over the last three months. The floor, made up of approximately 300,000 bottlecaps that have been collected over the last 5 years, is a glossy arrangement of craft beer brands, college logos, mantras, company tags, and abstract art.

“Craft Beer Cartel will be considered the ultimate destination for the beer enthusiast,” says Julian Siegel, “We will offer an unparalleled selection of beer, home brewing supplies, and beer-mabilia. Native Brewing founder, Adam Fine, will be brewing, advising, and always available to talk shop. We will be offering everything one would need to brew beer, and every beer one would want to buy. Hard to find kegs will be common, an 8-line growler fill station, glassware, T-shirts, and advice will abound. The decor is reuse/recycle. The floor of over 300,000 bottle caps, reclaimed wood bar, and as many reused materials were used as possible.  This was truly a communal and local effort and vision. This will be like the Disney World for beer, but the only lines we’ll have will be running beer!”