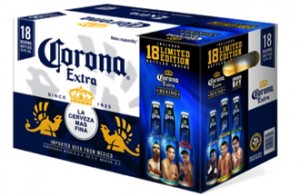 These specially-wrapped promotional bottles are included in the Corona Extra 18-pack bottle package, and feature the image, stats and signature of six Golden Boy boxers, including Danny Garcia, Marcos Maidana, Adrien Broner, Paulie Malignaggi, Daniel Ponce de Leon, and Leo Santa Cruz. Each champion selected has a multicultural appeal and is a favorite of boxing and Corona fans.

The Corona Extra Limited Edition boxing bottles will be available at retail from August 15 through October 31. This is the second year that Corona has featured Golden Boy boxers on its 18-pack bottle, following a successful program in 2013.

Additionally, from August 9 – September 2, fans can enter to win a VIP trip to the Mayweather vs. Maidana fight on September 13at the MGM Grand Garden Arena in Las Vegas, NV through the Corona Boxing hub: www.CoronaExtraUSA.com. The site also features exclusive content including fighter bios, videos and photos. And new for this year, site visitors can vote for which fighters will appear on the 2015 Corona Extra Limited Edition Boxing bottles.