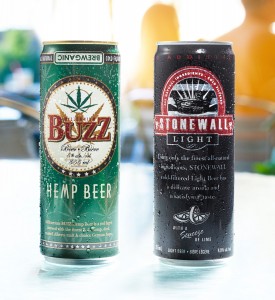 Rexam’s SLEEK cans contain the same amount of beer as regular 12oz. cans but the SLEEK cans are thinner, taller and, wellÔÇªSLEEKER. Cool Brewery carefully chose Rexam’s SLEEK cans because the unique size and shape makes them stand out from regular beer cans.

“Cans are one of the fastest growing segments in the Canadian beer market,” said Andrew Costa, Marketing Manager for Cool Brewery. “We have been very patient to choose a very unique can to properly present and pour our affordable, award winning beers. Rexam’s distinctive SLEEK can allows our beers to pour more fluidly and our customers say they prefer the feel of the SLEEK can in their hands. We wanted a beer can that was different from the other breweries and Rexam delivered,” he concluded.

Cool Brewery will also benefit from the advantages aluminum beer cans deliver such as durability, portability and UV barrier protection to preserve freshness. In addition, cans have a recycle rate of more than double other beverage packages.

Rich Grimley, president and CEO, Rexam BCNA, says the SLEEK can is a great choice to broaden retail appeal for Cool Beer. “Our 12oz. SLEEK can is the perfect packaging solution, enabling the brand to attract attention on store shelves with colorful, reflective graphics while delivering superior recycling, filling, distribution and retail display economics.”

Cool’s Millennium Buzz beer is the only all natural hemp beer in Canada and is brewed with British Columbia’s finest hemp, Alberta dark roasted malts and choice German hops. Stonewall Light is a refreshing all natural light lager adding a hint of lime to balance the fruity crisp and clean taste. Both beers have won numerous medals in the Canadian and Ontario Brewing awards and are available throughout Ontario, Canada.

We have 67 plants in 24 countries and employ 11,100 people. Our sales from ongoing operations in 2012 were in the region of $7 billion. Rexam is a member of the FTSE 100 and its ordinary shares are listed with the UK Listing Authority and trade on the London Stock Exchange under the symbol REX. For further information, visit www.rexam.com