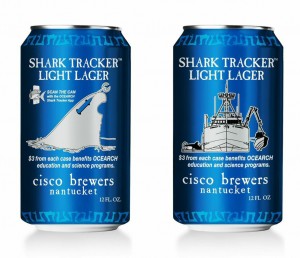 Nantucket, Mass. — Cisco Brewers (www.ciscobrewers.com) has teamed up with the OCEARCH group (www.ocearch.org) to produce a beer that will benefit research and education on apex predators of the ocean, while inspiring fascination rather than fear.

The OCEARCH team visited Nantucket in 2013 and again in 2014 as part of an educational tour, drawing huge crowds at each of their sessions on island. After seeing great turnout and interest at a fundraiser for OCEARCH hosted at the Brewery, the idea for Shark Tracker Light Lager was born.

Collaboration didn’t stop at the recipe. OCEARCH’s educational outreach includes the “Global Shark Tracker App” (free). Updates from the OCEARCH crew and exclusive video content as well as shark locations can all be viewed through your phone. OCEARCH also has a very active social media platform, and it made sense to bring the beer into that circle. Using Aurasma, an augmented reality program developed by HP embedded into the app, users of the Shark Tracker app can bring the Shark Tracker Light Lager cans to life, and see videos of the OCEARCH team in action.

After months of planning, the OCEARCH Team of Chris Fischer, Brett McBride and global brand director Chris Berger along with the sampling team at Cisco Brewers, blind tasted 4 styles of beer and chose a light, clean, and crisp pilsner to be brewed as the Shark Tracker Light Lager. Perfect for any on-the-water activity. Like tracking sharks. 4.8% abv

$3 from every case sold goes to OCEARCH in support of their education and outreach program.

Katharine, a 2300lb Great White tagged last year off of coastal Cape Cod, has completed her year-long tour down the coast and back. Her last ping was off the coat of Provincetown; track her on the app!

MORE ABOUT OCEARCH AND CISCO:

In order to capture the true essence of what OCEARCH is all about, Chris Fischer of OCEARCH and his crew invited Cisco Brewers out on their 126′ vessel for a day on the water to tag a great white.

The Cape Cod Expedition started last year in late July and ran through August. On that particular day, August 17th, after nearly 3 weeks of hard-core fishing, a great white had yet to be caught. At around 2pm the first signs of a white shark travelled across the boat. By 3pm, Betsy was landed on the 75,000lb. hydraulic lift. This massive shark was studied, tagged and released by scientists aboard the vessel. Witnessed in awe by the staff and friends of Cisco Brewers, this once in a lifetime experience landed the first Great White of 2013’s Cape Cod Expedition, and immediately spawned the collaborative beer vision.

Cisco Brewers knew it could help to build more brand awareness for OCEARCH and drive more people to the Global Shark Tracker app, which monitors the tracking devices that are attached to the shark’s dorsal fin.

Immediately Cisco went to work on a concept of producing a beer that would creatively connect beer consumers with the ultimate educational shark experience, which is the core of the OCEARCH mission.