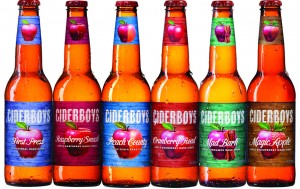 The BTI’s hard-cider judging, part of the institute’s ongoing World Beer Championships quality rankings, was the very first beverage competition Ciderboys Cider Co. has entered. The results are available online at www.tastings.com and will be published in All About Beer magazine in early 2014.

“A gold medal in the World Beer Championships represents exceptional taste and quality, and the BTI judges found what they were looking for when they sampled Ciderboys hard ciders,” said Joe Martino, Ciderboys Cider Co. Operating Partner. “Hard cider fans know quality when they taste it, too, and at Ciderboys Cider Co. we’re working overtime to keep up with demand.”

The World Beer Championships, founded in 1994, is an ongoing competition open to commercially produced beers and hard ciders from around the world. Using proprietary blind tasting methodology developed by the Beverage Testing Institute, expert judges award rankings based on a 100-point rating scale. Scores of 96 to 100 denote a “superlative” platinum award, while 90 to 95 points are “exceptional” gold award winners. Products earning 85 to 89 points are deemed “highly recommended” silver winners. The BTI’s top 15 hard ciders for 2013 are:

Launched in Wisconsin just one year ago, Ciderboys’ handcrafted hard ciders quickly won converts and soon expanded into nearby Midwestern states. Today Ciderboys’ sparkling hard ciders are sold in six-packs of 12-ounce bottles and on draft in 18 states from coast to coast.

Based in Stevens Point, Wis., Ciderboys Cider Co. produces its hard ciders using juice from fresh Washington State apples. The juice is heated to pasteurize it then fermented at cool temperatures in shining stainless steel tanks. Ciderboys uses a special hard-cider yeast imported from France, where hard ciders have quenched thirsts since the Middle Ages. The fermentation process is cool and slow, taking approximately two weeks for each batch. When fermentation is complete, the cider goes through a filtration process that renders a clear, sparkling liquid. No sugar is added to Ciderboys products, which are naturally gluten free.