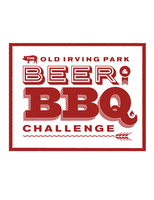 “Craft beer and slow cooked BBQ belong together,” said John Neurauter, Owner of Haymarket Pub & Brewery. “The pairings each team will present is the product of their passion and creativity, that’s the magic. This is going to be a very special event and we’re all in for a really great treat on August 2nd when we get to experience what they’ve created. Doing this in Old Irving Park and benefiting St. Viator sweetens the deal for me because I grew up here and went to St. Viator. We now live here and my son is a student at St. Viator, the 4th generation of our family to attend.”

Jaime Guerrero of Food Joy added, “Are you kidding me? A chance to showcase my BBQ and pair it with a tasty local beer? Dude…giddy-up! It’s a match made in heaven to pair the great cooks of Old Irving Park like me and the great breweries of Chicago. Great event unlike any other in Chicago this summer that will deliver a hyper-local experience. Even better that we’re able to benefit our local school and parish, St. Viator. Who wouldn’t want to be here?”

Guests will cast their vote, rating each on Best BBQ pork, Best Beer and Best BBQ and Beer Pairing. Teams include:

As for who will win, it’s going to be a tough competition. The winners will face off against Michelin-starred Moto Chef and Owner Homaro Cantu’s Grandma Lola Cantu and Trevor Rose-Hamblin at Old Irving Park’s newest brewery, owned by Homaro Cantu, Trevor Rose-Hamblin and Jeff Linnemeyer, during opening night of the soon-to-be-named brewery. Brewery opening date is set for early 2015. Click here for more details: http://youtu.be/7YNfY0-KvSI.

Tickets are $60 and available at www.beerbbqchallenge.com. All proceeds from the showdown will benefit St. Viator Parish & School in Old Irving Park.