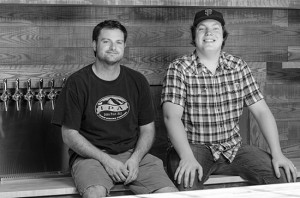 The San Francisco Brewers Guild is very happy to welcome Cellarmaker Brewing Company to our rapidly growing organization. Founders Connor Casey and Tim Sciascia are set to open a ten-barrel brewery and a twelve tap tasting room inside a former garage at 1150 Howard Street in San Francisco’s SOMA neighborhood. Their grand opening is scheduled for October 12th.

Cellarmaker started brewing a few weeks ago and plan on making an ever-changing lineup of beers. “You never know what you’re going to get when you come in,” said Casey. Four beers will be ready upon opening, including a Stonefruit Petite Sour, Batch #1 Porter, an American pale ale called Questionable Origins #1, and a Hop Slangin’ IPA.

The two founders are self-proclaimed hopheads, so you can expect a consistent lineup of IPA’s using American and New Zealand hops. At the same time, head brewer Sciascia will also create a series of experimental beers using barrel-aging techniques, sour yeast strains, and unusual adjuncts. Sciascia said, “We want to do extreme, big, bold flavors, but we also want to do delicate, sessionable, and subtle beers that are layered with complexity.”

You’ll be able to enjoy their beer primarily at the brewery, but it will also be distributed in San Francisco, and on a very limited basis, throughout the Bay Area. Cellarmaker will also be encouraging guests to take home growlers and bring in their own to be filled. They’ll be the first brewery in San Francisco to fill blank growlers of various sizes, and those sold by other breweries.

For Casey and Sciascia, establishing Cellarmaker in San Francisco was a personal and strategic choice. Although he grew up in L.A., Casey said, “I have a rich family history in San Francisco and always felt this was more of my home.” On the business side, he also explained “It’s an easy place to get too with BART and the highway. It’s a half hour from so many places. Also, I think in some cities, some of the stuff we plan on making would be totally ignored, and looked over for being too weird. In San Francisco people’s mind’s are open.”

As for Sciascia, he said Cellarmaker “Finally gives me the opportunity to brew in a world class city. I love the culture here. I’ve worked hard for it and feel so lucky to be a brewer in San Francisco. It’s the epicenter of beer. There’s such a great beer culture here and I’m blessed to be a part of it.”