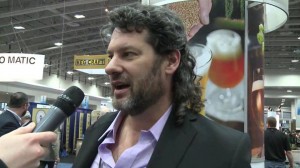 Representatives from the Brewers Association (BA), alongside Colorado governor John Hickenlooper and other notable brewing industry professionals, addressed a standing room only crowd of brewers and distributors during this morning’s Craft Brewers Conference general session in Denver, Colo.

“You are the Brewers Association,” he said.

These issues are becoming increasingly important, Papazian said, especially at a time when one out of every 200 adults in the country brews beer at home.

“We have become a nation of brewers and the world is watching,” he said.

Nonetheless, it’s been more than 200 years since a brewer has made their way to the Governor’s mansion. That changed when Colorado Governor and former craft brewer, John Hickenlooper, took office.

In taking the stage this morning, Hickenlooper suggested more brewers get involved in helping to shape the rules that govern the communities where brewers do business.

“This country has had a disruptive transformative change,” he said. “More of you should get involved in the civics of your community because it matters.”

That, paired with a “lifetime in trial and error, experimenting and making pragmatic decisions,” will help the craft category continue to grow and thrive both in Hickenlooper’s home state — which he described as both the Napa Valley of Beer and Munich of the west — and beyond.

“This is my challenge to all of you: Get your ass in gear,” he concluded.

After Hickenlooper exited the stage to applause and cheers from the audience, Deschutes Brewery founder Gary Fish addressed the crowd.

“We are living in the greatest age of beer in the history of the world,” he said, urging craft brewers to protect the “property they fought for.”

“Now that we have momentum and the interest of millions of passionate fans, others would like to have what we have,” he said, addressing the craft versus crafty debate. “Craft does matter. Maybe we can not own the term ‘craft,’ maybe nobody can, but it is important to continue to tell our story.”

That story is one of record-breaking growth in 2013.

Fresh off a year (in 2012) where craft beer production reached an all-time high, 2013 volumes grew 18 percent. That growth came at a time when overall beer sales declined 2 percent, Watson said. Nevertheless, 15.6 million craft barrels were sold in 2013, an uptick of 2.3 million over 2012. Craft pricing also went up 2.3 percent, said Watson.

“This is the fastest growth rate we’ve seen in the last five years,” said Watson. “You may have noticed there’s a few more people here than in years past.”

To his point, there are more than 9,000 in attendance at this year’s conference.

Not all news is good news, however, as Watson reported to the crowd 44 breweries closed their doors, adding that “this is a number everyone should expect to see rise in the coming years.”

Additionally, Gatza touched on a number of other concerns facing the industry, chief among them was what he described as a necessity to reform franchise laws and a commitment to producing quality beer.

“Franchise law reform is needed in many states to allow small brewers greater say in the control and destiny of brands they’ve created,” said Gatza.

But it was quality beer that Gatza emphasized the most — he listed it as a concern three times in his presentation.

After retelling the story of visiting a beer fest and sampling a number of subpar offerings, Gatza fired a warning shot at new craft brewers paying less attention to quality.

“Don’t f*ck it up,” he exclaimed, a rallying cry that was met with cheers and applause from the entire audience.

And those new beers he sampled at the above-mentioned fest?

“They thought they were doing an awesome job but, the truth is, they are not,” he said.

A number of awards were given as well.

Ron Extract, of Jester King Brewery in Austin, Texas, was given the FX Matt Defense of the Industry Award. Teri Fahrendorf, of Pink Boots Society, was given the Brewers Association Recognition Award. Lastly, the Russell Schehrer Award for Innovation and Excellence in Brewing was given to Mitch Steele of Stone Brewing Co., of Escondido, Calif.