To help the effort, the non-for-profit trade group, which represents the interests of small and independent craft breweries, tripled down on its promotion of the indie badge during this year’s Craft Brewers Conference, taking place in Nashville.

In addition to plastering images of the upside down beer bottle throughout the Music City Center, where the event is being held, the BA also named the WiFi network “Independence Matters” and created a seal-themed password to get online.

And in case any of the 13,000 conference attendees missed those hints, leaders from the organization and its board took to the main stage on Tuesday morning to ask BA-defined craft breweries to print the seal on their labels in a continued effort to distinguish their brands from those owned by larger beer companies.

BA president and CEO Bob Pease told attendees that more than 3,300 small and independent craft brewers have adopted the seal, placing it on labels, marketing materials or in taprooms. Those brewers, he said to applause, account for more than 75 percent of craft brewer volume.

But adoption of the seal is not enough, Pease said. He wants more beer companies to commit to putting it on their labels.

“If you package your beer, please think long and hard about adding the seal to your packaging,” he said. “We know that is not an easy ask, but it’s important.”

In his remarks, Pease argued that the seal is a sign of unity among BA members, and that it helps BA-defined craft brewers clearly differentiate their brands from those acquired by large brewers such as Anheuser-Busch, Miller Coors and Constellation Brands. According to Pease, those companies “seek to blur the lines of independence and confuse the beer drinker.”

“We know who we are, but not all beer lovers do,” he said. “This new certified mark is a unifying symbol that tells beer drinkers the true story of our independence and who makes their beer.”

In a speech that focused primarily on the potential negative repercussions of “Big Beer’s” foray into craft, Wallace said the seal helps “clear the smogginess in the air created by the lack of transparency and obfuscations by the large multinational breweries.”

“The many faux craft, crafty, captive, capitulated and acquired brands are weapons in the arsenal of the big breweries and used to control as much of the market as possible,” he said. “Cleaver and deceptive packaging design, omission of ownership statements on labels, intellectual property violations, denigrating and expensive marketing campaigns, monopolistic practices choking off raw materials and distribution channels, rampant violations of trade practices and exclusionary tactics in venues and accounts in many markets, these guys are out to eat our collective lunch and take your kids’ lunch money as well.” 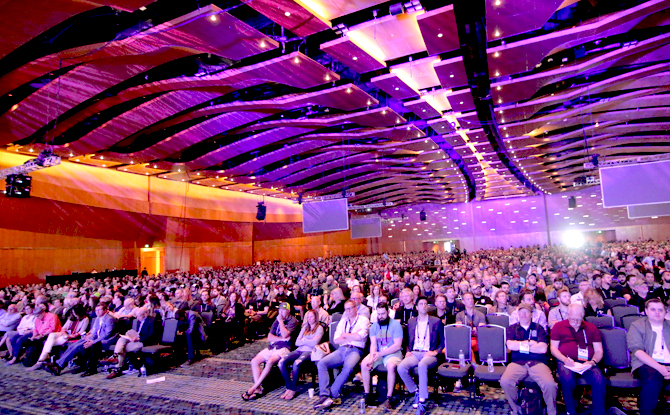 To further BA’s “Independence Matters” marketing campaign, the not-for-profit trade association introduced a new slogan — “Stronger Together” — as well as a new video of BA member brewers voicing their support for the seal.

Though it was a smaller component of Tuesday’s general session remarks, both Pease and Wallace called on BA members to lobby Congress to make permanent the Craft Beverage Modernization and Tax Reform Act (CBMTRA) — the two years of excise tax relief that passed into law in December as part of the Tax Cuts and Job Act.

Oregon Rep. Peter DeFazio, who also addressed attendees during the 2017 CBC and returned once again to discuss CBMTRA, added that brewers need to “document where that money is being invested” and “the jobs it produces.”

“The bill is doing what we said it would do,” he said.

However, with tax reform for brewers sunsetting in 2020, Wallace said he fears the higher tax rate will “cause a wave of brewery failures amongst those already on the brink.”

“We need to stay united and speak with a common voice,” he said. “Remember, we are stronger together.”

Wallace called direct-to-consumer sales via taprooms “a pragmatic approach” to a “saturated” marketplace.

“Without direct sales, these newer, smaller breweries might not be viable businesses,” he said, adding that those sales are increasingly important as the number of independent wholesalers dwindles due to consolidation, which he called “a direct threat to craft brewers.”

“The BA strongly supports a truly independent distribution tier,” he continued. “When large multinationals hold too much sway with their distribution partners or directly own them, it reduces market access for everyone else.”

However, Wallace also said brewers and wholesalers need to work together in their statehouses on “rational modifications to outdated franchise protection laws.” While “outright abolition” of franchise laws doesn’t make sense, he said, it is also “unfair and unjustifiable” that wholesalers impose restraints and prevent beer companies from exiting bad business relationships.

“Abuse of the system is real,” he said.

Pease and Wallace also praised the work of state brewers guilds. Wallace called for guild members to remain united, possibly hinting at the nine New Jersey craft brewers who split from the New Jersey Brewers Association to form the Brewers Guild of New Jersey in February.

Wallace recalled the 2016 split in the Colorado Brewers Guild, when 14 beer companies defected to form Craft Beer Colorado due to the inclusion of A-B-owned Breckenridge Brewery on the group’s board, among other reasons, but recombined after five months.

“We’ve come a long way in the last two years, building upon a previous 20 years as a guild,” he said. “I would encourage members of guilds around the country to not disparage each other but to find common ground.”