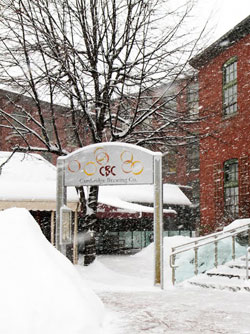 CAMBRIDGE, MA – Cambridge Brewing Company announced last week that it would begin bottling its beer and distributing throughout the state of Massachusetts.

“Year one we are probably not going to do more than five or six-thousand cases and will only distribute locally and throughout Massachusetts,” said Brewmaster Will Meyers.

Meyers confirmed to Brewbound that their beer would be made at a different location from their brewpub, but could not comment on which brewery they would be renting space from.

“I think people like Pretty Things, Stillwater and Mikkeler have pioneered the concept that it is okay to make beer and not own your own brewery,” he said. “Granted we do own our own brewery, but it certainly is not large enough to accommodate a bottling line and that capacity.”

Meyers said they plan on brewing a “couple times a month,” and will be looking to brew beers other than their house offerings.

“We will do a couple of year-round beers and we will definitely do the Great Pumpkin Ale throughout the autumn,” he said. “Throughout the rest of the year, rather than do the seasonal formula, everything will just tbe a one-off every month or two.”

In fact, the Great Pumpkin Ale was the catalyst for their decision to begin bottling.

“We went up to Mercury Brewing Company in Ipswich last autumn and brewed some batches of our Great Pumpkin Ale up there because the demand for our it has been outgrageous over the years,” said Meyers “It has just grown and grown and caused us not to be able to make any other beers at our brewpub.”

Last year, the team at Cambridge assembled over a dozen people to help chop 2000 pounds of locally grown, organic sugar pumpkins. They loaded them into the van and headed to Ipswich. In two days, they were able to brew about 50 percent of their total production of the pumpkin beer, which would have taken 12 days at the brewpub.

“We were very pleased with the result and I think that made us think – hey we could actually go make our beer to our specifications and completely under our own control by renting someone elses brewery,” said Meyers.

Cambridge Brewing Company is just beginning to work with a local artist on label design and hopes summertime will be the first release of the new bottle offerings.

When questioned as to whether or not this was the first step into bottling more in the future and potentially growing into a larger space, Meyers chuckled and replied “probably,” but admitted they are being cautious.

“We are trying to not look super long-term. We are just going to do this and see if its fun” he said. “The nice thing is, rather than spend a couple million dollars on a brewery and then a couple years later decide that we hate our lives, we have the opportunity to help out a local brewery that has some extra capacity, make the beer ourselves and not neccisarily take the huge financial risk to determine if this is something we want to do long-term.”