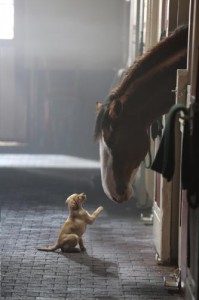 “It’s a tremendous honor to be nominated by the Academy of Television Arts & Sciences and an even greater recognition to garner two of five nominations in the category,” said Brian Perkins, vice president, Budweiser. “Not only have our ads achieved critical acclaim, but both creatively bring the Budweiser brand story to life for loyal beer drinkers and new generations of consumers.”

This is Budweiser’s first nomination in the category since 2006’s “Clydesdales American Dream.” Similar to the previously-nominated ad, both “Puppy Love” and “Hero’s Welcome” feature the iconic Budweiser Clydesdales.

A Super Bowl fan-favorite, “Puppy Love” tells the story of a 10-week old puppy that forges a special bond with the Budweiser Clydesdales at Warm Springs Ranch, Budweiser’s Clydesdale breeding facility. The canine star of the ad became a viral sensation after his debut, driving more than 51 million YouTube views, more than 1 million Facebook likes and even launching his own Twitter handle, @BudweiserPuppy.

In “Hero’s Welcome,” Budweiser continues its long-standing support of the U.S. military, chronicling a single soldier’s homecoming from Afghanistan. To the genuine surprise of Lt. Chuck Nadd, his entire hometown ofWinter Park, Fla. and the world-famous Budweiser Clydesdales joined together in welcoming him home with a ticker tape parade.

“Budweiser is an iconic brand and with these films we hoped to represent its deeply-rooted values through entertaining and powerful storytelling.” said Mike Byrne, Chief Creative Officer at Anomaly.

The ads have been recognized by numerous awards, including the top spot and third place in the USA TodaySuper Bowl Ad Meter, “Puppy Love” and “Hero’s Welcome,” respectively.

Budweiser, an American-style lager, was introduced in 1876 when company founder Adolphus Busch set out to create the United States’ first truly national beer brand — brewed to be universally popular and transcend regional tastes. Each batch of Budweiser follows the same family recipe used by five generations of Busch family brewmasters. Budweiser is a medium-bodied, flavorful, crisp and pure beer with blended layers of premium American and European hop aromas, brewed for the perfect balance of flavor and refreshment. Budweiser is made using time-honored methods including “kraeusening” for natural carbonation and Beechwood aging, which results in unparalleled balance and character. The brand celebrates great times and has used the phrase “Grab Some Buds” in advertising since 2010.