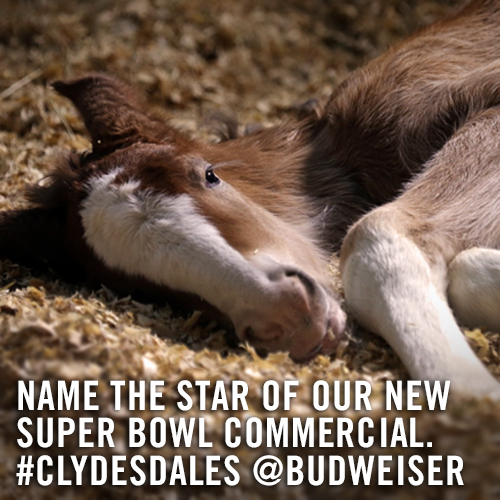 The iconic brand marked the occasion with another “first” involving the Budweiser Clydesdales — tweeting the first photo of a member of the elite ”Budweiser Clydesdales Class of 2013,” a beautiful 150-pound baby born the morning of Jan. 16. It was the brand’s first-ever Tweet.

Using #clydesdales, Budweiser also is asking Twitter followers of @Budweiser and Facebook friends to help name the young equine star, who will be seen by an estimated 110+ million viewers next Sunday during Super Bowl XLVII.

“This newest member of the Budweiser Clydesdale family was 7 days old on the day this part of the Super Bowl commercial was filmed,” said Jeff Knapper, general manager of Clydesdale operations. “A star was truly born on Jan. 16.”

More than 30 baby Clydesdales are expected to be born this year at the 300-acre Warm Springs Ranch, the state-of-the-art breeding facility for the Budweiser Clydesdales in Boonville, Mo.

On Super Bowl Sunday on Feb. 3, the Budweiser Clydesdales will appear in a new 60-second spot, “Brotherhood,” which chronicles the bond a Clydesdale foal shares with his trainer. Partially shot at Warm Springs Ranch, “Brotherhood” will take the Clydesdales advertising into new territory by providing a new level of access to their early years.
This is the Clydesdale’s 23rd Super Bowl spot since first appearing in a big game spot in 1986.

In addition to the baby foal born this month that will appear in the spot, other young Clydesdales, including an 8-month-old and a 2-year-old, will be featured, in addition to a full hitch of eight adult horses.

Budweiser’s Twitter channel debuts after the social media platform introduced age verification, allowing the beer to restrict its tweets to users 21 and older.

2013 A MILESTONE YEAR
The Clydesdales celebrate a major milestone in 2013 — the 80th anniversary of their association with Anheuser-Busch. The Budweiser Clydesdales have been an integral part of Anheuser-Busch’s heritage since April 7, 1933, and their strength and majesty symbolize Budweiser quality as well as integrity, achievement, success, perfection and team spirit. They were formally introduced to celebrate the repeal of Prohibition for beer.
“The symbol has become synonymous with Budweiser — the quality that goes into the beer, as well as the time, energy and passion we put into taking care of the horses,” Knapper said.

How is the baby Clydesdale featured in the commercial doing? Both mother, 7-year-old Darla, and baby are doing well, reports John Soto, supervisor of the breeding operations at Warm Springs Ranch in mid-Missouri.

“We have had two foals born so far this year and they’re both doing very well,” Soto said.

“We take great pride in each and every one of our horses, and Warm Springs Ranch is a great home,” Knapper said. “The Budweiser Clydesdales are the envy of the equine world. We treat them like royalty, and they are among the best-cared-for animals in the world.”
Anheuser-Busch has about 200 Clydesdales in its herd, with about half of them at Warm Springs Ranch in Cooper County.

About Warm Springs Ranch
Warm Springs Ranch features a 25,000-square-foot breeding barn with a veterinary lab and 10 pastures, each with a customized, walk-in shelter and free-flowing water dispensers. The farm sits on 300-plus acres of land, allowing the Clydesdales plenty of room to exercise and roam.

Dedicated staff is on site around the clock to ensure the baby Clydesdales are welcomed into the world in comfort and safety. Those Clydesdales born with the proper markings for a Budweiser Clydesdale — a bay coat, a blaze of white on the face, four white stocking feet, and a black mane and tail — have a future spot on one of the traveling hitches.

About Budweiser
Budweiser, an American-style lager, was introduced in 1876 when company founder Adolphus Busch set out to create the United States’ first truly national beer brand — brewed to be universally popular and transcend regional tastes. Each batch of Budweiser follows the same family recipe used by five generations of Busch family brewmasters. Budweiser is a medium-bodied, flavorful, crisp and pure beer with blended layers of premium American and European hop aromas, brewed for the perfect balance of flavor and refreshment. Budweiser is made using time-honored methods including “kraeusening” for natural carbonation and Beechwood aging, which results in unparalleled balance and character. The brand celebrates great times and has used the phrase “Grab Some Buds” in advertising since 2010.