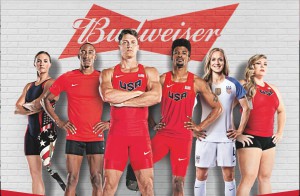 NEW YORK — Brewing America’s No. 1 full-flavored lager requires tireless hard work, commitment, and attention to detail—so does training, qualifying and competing in the Rio 2016 Olympic and Paralympic Games. Inspired by the devotion and grit that it takes to go for gold, the Official Beer Sponsor of Team USA has recruited six exciting athletes to join Team Budweiser.

From a decathlete to a Paralympic triathlete to a Gold Medalist in Women’s Soccer, each member’s story, personality and commitment to not taking short cuts reflects Budweiser’s all-American values.

“We handpicked these athletes because of their inspiring stories, courage and belief that they can achieve something incredible for their country,” said Ricardo Marques, vice president, Budweiser. “These are also the values of Budweiser, and we’re extremely proud to partner with them this summer as they work toward their ultimate goal.”

To celebrate Team Budweiser in the biggest way possible leading up to games, the brand is tapping artist Malika Favre to design a 225-foot tall mural featuring the athletes in midtown Manhattan, with painting set to begin in late May. Team Budweiser has also inspired limited-edition patriotic packaging, set to be released in June. A number of athletes will appear in a new Budweiser national TV spot, scheduled to premiere in June and air during the Rio 2016 Olympics broadcast. Budweiser is also creating a branded and editorial content series that tells the inspiring stories of Team Budweiser athletes, which will premiere in June.

Budweiser will also be working with legendary WNBA star and Two-time Olympic Gold Medalist in Women’s Basketball, Candace Parker, as an ambassador for its Team USA sponsorship.

Budweiser’s partnership with the United States Olympic Committee spans nearly three decades and includes 16 Olympic Games and Olympic Winter Games. The brand has been an Olympic supporter since 1984 when it served as the official beer sponsor of the Los Angeles Olympic Games in 1984.

Budweiser, an American-style lager, was introduced in 1876 when company founder Adolphus Busch set out to create the United States’ first truly national beer brand – brewed to be universally popular and transcend regional tastes. Each batch of Budweiser stays true to the same family recipe used by five generations of Busch family brewmasters. Budweiser is a medium-bodied, flavorful, crisp and pure beer with blended layers of premium American and European hop aromas, brewed for the perfect balance of flavor and refreshment. Budweiser is made using time-honored methods including “kraeusening” for natural carbonation and Beechwood aging, which results in unparalleled balance and character.