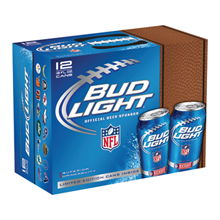 ST. LOUIS – Bud Light, the official beer sponsor of the National Football League, is proclaiming this season the “Year of the Fan” and enhancing the NFL experience for fans everywhere through a variety of promotions, events, offers and contests.

“Our multi-touch sponsorship will provide everything the NFL fan needs to have a stellar season,” saidMike Sundet, vice president, Bud Light. “From in-store promotions and digital activations, to on-site activities and the return of Bud Light Hotel at Super Bowl XLVII, our goal is to make the excitement of the upcoming season even better.”

Bud Light kicked off its season earlier this month with the launch of the Bud Light Fantasy Football League. This unique game connects Bud Light drinkers with one of their favorite pastimes, fantasy football. It gives them the chance to compete for hundreds of prizes, including Super Bowl tickets, by building their ultimate fantasy roster with special codes printed on more than two billion specially marked Bud Light bottles.

To join the Bud Light Fantasy Football League, fans age 21 and older can register at www.BudLight.com/FFL. To participate, fans enter their codes on the website and use them to build their teams. Each code represents an NFL team quarterback, running back, wide receiver/tight end, kicker or defense. The more bottle codes a fan collects, the more roster options he or she has to choose from*.

In addition to serving as the official beer sponsor of the NFL, Bud Light has local sponsorship agreements with 28 of the 32 NFL teams. The brand will celebrate the start of the season by unveiling special packaging to help fans get into the “Year of the Fan” spirit. NFL- and team-branded 12-packs of cans will feature innovative tactile packaging that feels like an actual football. The cans will feature the NFL Shield, and team-specific cans will be available in their respective markets. Commemorative aluminum bottles of Bud Light will also feature the NFL Shield. Secondary packaging will feature similar elements, as well as NFLShop.com discounts.

Bud Light is the presenting sponsor of the NFL’s celebration of Hispanic Heritage Month and will partner with the NFL and Hispanic Heritage Foundation for the second annual NFL Hispanic Heritage Leadership Awards Presented by Bud Light. The awards recognize the contributions of Hispanic leaders in each NFL market. As part of Bud Light Latino’s larger Carne Asada program, Chef Aaron Sanchez will also help promote Futbol Americano with a tailgate tour and cross-merchandising program.

To extend the “Year of the Fan” beyond just this season, NFL fans have the opportunity to win two tickets and a parking pass to every home NFL game for the rest of their lives through Bud Light’s Football Tickets for Life promotion. Consumers age 21 and over can enter through Bud Light’s Facebook page until January 11, 2013, and the winner will be announced prior to Super Bowl XLVII**.

Bud Light will also host Recycling Zones during tailgates in nine NFL markets: Detroit, Philadelphia,Washington D.C., Atlanta, Jacksonville, Miami, Houston, Kansas City and San Francisco. Fans will be encouraged to participate in the recycling activities at the tailgating areas, and all activations will lead up to America Recycles Day on November 15.

Throughout the season, Bud Light will debut four new NFL-themed advertisements, two of which — “Very Superstitious” and “My Bud Light” — will first air during the NFL Kickoff game between the New York Giants and Dallas Cowboys on Sept. 5. Both creative spots, which were produced by Translation, put a focus on the NFL fan. “Very Superstitious” pays homage to the sometimes bizarre rituals fans will perform in the name of team success, and “My Bud Light” welcomes fans to the Bud Light Fantasy Football League, humorously highlighting the potential fantasy success (or fumbles) each Bud Light bottle code represents. The two additional NFL-themed ads will air later in the season.

Other activations throughout the NFL season include in-store promotions with Doritos and Tostitos, exclusive on-package discounts with NFLShop.com and special Bud Light Lime NFL packaging.

For more information on Bud Light’s NFL sponsorship throughout the season, visit BudLight.com or Facebook.com/BudLight.