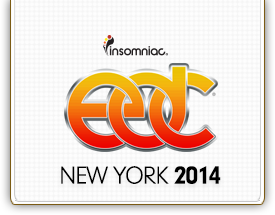 “Bud Light looks to align with the best Millennial music properties and there is no greater environment to connect with our target than Electric Daisy Carnival,” said Rob McCarthy, vice president of Bud Light. “This sponsorship allows Bud Light Platinum to continue to provide EDM enthusiasts with original content, premium nightlife experiences and access to exclusive music performances.”

This weekend in the MetLife 50 Club, positioned directly on the fifty-yard line, Bud Light Platinum will create a nightclub that offers guests a complete nightclub experience and exclusive live performances.

“Electric Daisy Carnival is the largest EDM brand in America and we’re excited to kick off a multi-year partnership with Bud Light Platinum as an integral part of the EDC experience,” said Russell Wallach, president, Live Nation Media & Sponsorship. “It starts in New York City as we march towards EDC Vegas, which is far and away the biggest EDM event in the world.”

The Bud Light Platinum designed club will feature exclusive DJ sets from an impressive roster of both high-profile and emerging talent, including 3LAU, Wax Motif, Destructo, Tommy Trash and many more. In addition to performances within the nightclub, Bud Light Platinum will sponsor three ‘Platinum Decks’ for nearly 4,000 VIPs to enjoy the performances on both stages.

“We are really excited that our partnership with Bud Light Platinum will help bring a nightclub experience to festival guests for the first time, beginning this weekend with EDC New York,” said Pasquale Rotella, founder and CEO of Insomniac. “This experience will be unlike anything we’ve ever done before, and thanks to Bud Light Platinum this unique concept — producing an intimate club inside the festival — is coming to life.”

The Bud Light Platinum designed club premieres this Saturday and Sunday (May 24 and 25) at EDC New York at MetLife Stadium. Doors will open to guests who are +21 from 2PM— 10PM. Festival attendees can follow @BLPlatinum on Twitter for instructions on how to gain expedited entry to the nightclub.

Bud Light Platinum, a premium light lager, was introduced in January 2012 and was the No. 1 best-selling new beer of the year. Bud Light Platinum is triple-filtered to ensure it retains the key characteristics of Bud Light — it’s refreshing and drinkable — but with a slightly sweeter taste and 6% alv./vol.* that delivers a unique, bold and smooth light beer experience. Bud Light Platinum is brewed using a unique combination of golden malts and grains, as well as mild hops, which creates its pale, golden color, slightly sweeter taste and smooth finish. For more information, visit www.BudLightPlatinum.com.

Insomniac produces some of the most innovative, immersive music festivals and events in the world. Enhanced by state-of-the-art lighting, pyrotechnics and sound design, large-scale art installations, theatrical performers and next generation special effects, these events captivate the senses and inspire a unique level of fan interaction. The quality of the experience is the company’s top priority. Throughout its 20-year history, Insomniac has produced more than 250 festivals, concerts and club nights for nearly four million attendees in California, Colorado, Florida, Nevada, New York, Texas, Puerto Rico, and theUnited Kingdom. The company’s premier annual event, Electric Daisy Carnival Las Vegas, is the largest multi-day music festival in North America, and attracted more than 345,000 fans over three days in June 2013. The company was founded by Pasquale Rotella, and has been based in Los Angeles since it was formed in 1993.