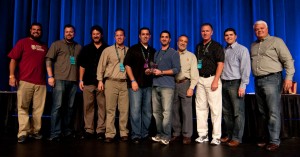 DENVER – The National Beer Wholesalers Association (NBWA) and the Brewers Association (BA) are pleased to announce that Brown Distributing Company, based in West Palm Beach, Florida, has been selected as the 2012 Craft Beer Distributor of the Year. The Craft Beer Distributor of the Year Award , now in its sixth year, recognizes the beer distributor who does the most to market, promote and sell craft beer. NBWA and BA presented the award jointly today at the Great American Beer Festival┬« in Denver, Colorado.

Brown Distributing Company, a family-run Florida company for more than 90 years, has evolved into a craft beer powerhouse, distributing beer from 64 craft breweries to nearly 4,000 retail accounts throughout the state. Over the past 12 months, the company has achieved a 76% increase in craft beer sales volume.

Brown’s efforts to promote craft beer include social media engagement that helps improve customer relationships and a website that educates consumers through such features as an interactive distribution map, brewer profiles, an events calendar, frequent blog posts by staff and a client and customer newsletter. The company also launched a “Drink like a local” campaign that encourages retailers and consumers to support local beers and educates and promotes all of the breweries that are helping drive craft beer culture in the state of Florida. Brown also works aggressively to introduce craft beer into new occasions by participating in events such as chocolate festivals, wine events and even mango festivals.

“The entrepreneurial spirit of craft brewers continues to add energy and excitement to the American beer industry, and beer distributors take great pride in serving as the vehicle to market for these brands,” said NBWA President & CEO Craig Purser. “NBWA is proud to recognize Brown Distributing Company, DeCrescente Distributing Company and Tryon Distributing for their role in strengthening the craft beer segment and bringing American consumers the most extensive choice and variety of beer in the world. The craft beer category continues to grow at double digit rates thanks in part to the strong relationship between craft brewers and beer distributors.”

The National Beer Wholesalers Association (NBWA) represents the interests of America’s 3,300 licensed, independent beer distributor operations in every state, congressional district and media market across the country. Beer distributors are committed to ensuring alcohol is provided safely and responsibly to consumers of legal drinking age through the three-tier, state-based system of alcohol regulation and distribution. To learn more about America’s beer distributors, visit www.AmericasBeerDistributors.com .

The Brewers Association is the not-for-profit trade association dedicated to small and independent American brewers, their craft beers and the community of brewing enthusiasts. The Brewers Association (BA) represents more than 70 percent of the brewing industry, and its members make more than 99 percent of the beer brewed in the U.S. The BA organizes events including the World Beer Cup┬« , Great American Beer Festival┬« , Craft Brewers Conference and BrewExpo America┬« , SAVOR ? : An American Craft Beer & Food Experience and American Craft Beer Week . The BA publishes The New Brewer magazine and its Brewers Publications division is the largest publisher of contemporary and relevant brewing literature for today’s craft brewers and homebrewers.

Beer lovers are invited to learn more about the dynamic world of craft beer at CraftBeer.com and about homebrewing via the BA’s American Homebrewers Association . Follow us on Twitter .