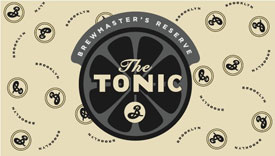 BROOKLYN, NY – The newest beer to be added to Brooklyn Brewery’s Brewmaster’s Reserve Series was inspired not by other beers, but in fact a cocktail.

A recent post on the Brooklyn Brewery blog, tells the story of “The Brooklyn Tonic,” taking its name from a cocktail artfully crafted by bartender Sam Ross at the famous NYC cocktail bar Milk & Honey.

Unfortunately for the folks at Brooklyn, paying homage to the cocktail by using the same name for their special brew wasn’t at the top of the TTB’s approval list, so they settled on Tonic.

The beer will begin shipping to accounts at the end of May and should be available on tap beginning in early June.

To celebrate the release of Tonic, Brooklyn Brewery will be throwing a party on May 23. The event is exclusive but they have partnered with Untappd to give away 10 pairs of tickets to local fans. To enter, all you need to do is sign in to Untappd and drink a bottle of Local 1 or Local 2 at any one of these NYC venues.