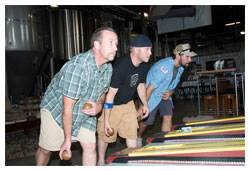 The Skeeson starts October 3rd, and games will be played each Monday night at 6pm at the Tasty Weasel Taproom in Longmont. The season will go until every team has played each other. The league caps out at 18 three-person teams, and the cost to join is $60. The champs will get FREE entry into the next Skeeson. To sign up, players can email ob@brewskeeball.com. The Tasty Weasel will be offering “Skee fo Free” nights leading up to the tournament, stay tuned to the Oskar Blues facebook page for details.

Created by the owners of Full Circle Bar in Brooklyn, NY, Eric Harris Pavony and Evan Tobias re-invented the game of Skee-Ball for adults in a modern and exciting way. Since establishing the first-ever competitive Skee-Ball league in New York City in 2005, Brewskee-Ball has fashioned a loyal network of teams, players and fans across the country.

Dale Katechis, founder of Oskar Blues, got the BrewSkee bug on a recent visit to FCB. Dale, brewery president John Bryant, and a few other OB team members returned from their experience determined to bring BrewSkee-Ball to Colorado.

“They talked about brew, and we talked about Skee,” says founder Eric Pavony. “It was clear they had the same obsession with their beer that we had with Brewskee-Ball.”

FCB has garnered the respect and following of craft beer lovers as its selection of American craft beer in cans continues to grow, making Oskar Blues a natural choice for their Rocky Mountain connection.

“We were attracted to the idea of canned beers because we had no basement and didn’t know what to do with empty bottles,” says Pavony. “Plus, we liked good beer and by 2009 there was plenty available in lightweight, easily recyclable and portable aluminum cans. We soon found out the many other benefits of the can: they chill faster, keep beer fresher and they look pretty awesome on a magnetic chalkboard. We were in love.”

This affection has made FCB’s canned beer collection one of the most comprehensive in NYC with nearly 70 different American craft beers.

“We were already big fans of Oskar Blues, and their beers were among the first we selected. FCB proudly serves the entire Oskar Blues can arsenal.”

FCB is complete with a professional Skee-Ball stadium where league and tournaments are played. There is a Hall of Fame, Wall of Champions, stadium seating and the bar itself is made from old Skee-Ball lane parts. Friends and fans can also watch all the Brewskee-Ball action on a TV above the bar, which shows live video of the stadium at all times.