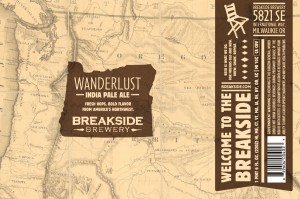 Portland, OR – We are excited to introduce our newest year-round beer: Wanderlust IPA. Why release a second, year-round IPA, you might ask? Our original Breakside IPA has sold so well in Oregon that we’ve found ourselves unable to expand our brewery’s sales to remote places like, oh, Seattle. It’s a good problem to have, to be sure, but a problem nonetheless. Faced with this, we’ve decided to make another awesome IPA intended for export to lands near and far.

Hence, Wanderlust IPA. It is modeled after our hugely popular double IPA, “India Golden Ale,” that our director of brewing operations, Jacob Leonard, brewed earlier in 2013 as a collaboratiion with Ninkasi Brewing. Made with Mosaic, Summit, Simcoe, Cascade, and Amarillo hops, it is bright golden in color and has intense tropical, dank, and grapefruit notes. By keeping the malt profile as light as possible, the interplay of hop flavors can really shine. The beer clocks in at only 6.6% ABV and 50 IBU, but it packs as much hop flavor and aroma as any IPA out there. This beer is currently available in bottles in OR and WA and will soon be available in Idaho and British Columbia as well. Draft is extremely limited, but the beer can always be found on tap at our Milwaukie Taproom and at select special events in Oregon.

Also shipping in the next week is Autumn Gold, a hop forward copper ale brewed to celebrate our unusually pleasant fall weather. Made entirely with Centennial hops, this “session IPA” is intensely floral with notes of lime, blueberries, and forest air. This beer is draft only and will be available throughout Oregon via our normal distribution network; limited draft will also be released to Idaho and British Columbia in the coming weeks.

We will be celebrating the release of this beer with a launch party at Bottles (5015 NE Fremont) in Portland on Friday, November 1 from 4-7 PM. As always, our brewers will be on hand to discuss the beer, share a pint and raffle off plenty of Breakside swag. In addition to Autumn Gold, Bottles will also be tapping one of the very last kegs of our GABF-award winning sour ale, Passionfruit Sour and we will also be pouring a 1/6 barrel of our Coconut Pumpkin Sweet Stout, a 9.4% behemoth of a dessert beer. To complement the beers, Brant, Sean and the rest of the crew at Bottles will be serving up their awesome BBQ, including their smoked wings, which have long been absent from the menu and have a special place in our brewers’ hearts. We hope you’ll join us for this awesome release!

Finally, the Breakside brew staff continues the march towards our goal of 100 different beers released in 2013, which means that our pub and taproom have exciting new beers coming on tap all the time. Our Milwaukie taproom currently has 24 of our beers available, including 4 sour beers, 5 barrel-aged offerings, and both of our medal winning entries from this year’s Great American Beer Festival. Some of the current releases: a Maple Smoked Lager brewed in honor of Saraveza’s 5th Anniversary; Framboise, a sour raspberry ale with Ceylon cinnamon; Rye Barrel-Aged Fresh Hop IPA, a blend of our Fresh Hop Citra IPA with barrel-aged Breakside IPA that spent eight months in a rye whiskey barrel. The blend of “fresh” and “old” flavor is surprisingly harmonious and complimentary. Come by our Dekum or Milwaukie locations and enjoy the wide range of beers currently on tap!

Other Events We’re Part Of