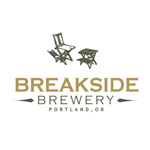 PORTLAND, OR – Breakside Brewery recently claimed a silver medal for its classic Irish-style Dry Stout at the 2011 Great American Beer Festival competition, the largest national beer competition recognizing the most outstanding beers produced in the United States. The top three winners in the competition’s 83 beer-style categories were announced October 1 at the 30th annual Great American Beer Festival awards ceremony held at the Colorado Convention Center in Denver, Colorado. The 2011 Great American Beer Festival competition winners were selected by an international panel of 169 expert judges from record number of 3,900 entries received from 522 U.S. breweries. The Breakside brewing team of Ben Edmunds and Sam Barber are also excited to announce the release of several new brews for October as well as the return of one of their popular past beers.

Today, the brewery releases its Dark Mild, a traditional low alcohol brown ale. Tapping later this week will be a Farmhouse Golden designed for St. Jack Restaurant (2039 SE Clinton). This blended brew uses a persnickety French saison yeast strain and was partially fermented on fresh tarragon. The beer is the second in the series of collaboration beers that Breakside began in August with some of Portland’s top chefs. The beer will be available both at the brewery and at St. Jack.

Later in the month, expect to see a traditional English IPA and a Belgian-style beer called Ambrée, a malty red ale made with elderflower and elderberry. Returning from the vault of ‘beers of the past’ is Breakside’s Strong Northwest Saison. Originally brewed with the staff of Saraveza, this beer is a hybrid of a French saison and an American-style double IPA.

All of these beers will be available throughout October at Breakside’s pub as well as at select beer bars and restaurants around Portland.