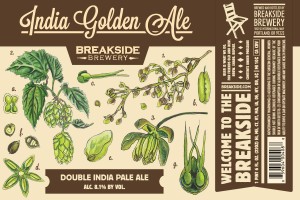 Portland, OR – Versatile fan favorite Breakside Brewery is releasing India Golden Ales in bottles and on draft. Breakside’s IGA is the lightest, hoppiest double IPA you’ll ever taste. Originally released in 2013 as a limited draft only special collaboration with Ninkasi Brewing, IGA will be bottled for the first time for a limited run between April 8th to the end of May.

Our popular “golden double IPA” returns for the next two months, now available for the first time in bottles. this beer was a trendsetter last year when it was first released on draft, as it highlights the route that lots of new hop bombs are headed: light in body, lighter in color, and HUGE in citrus flavor and aroma.

India Golden Ale or “I.G.A.” is a showcase for two relatively new hops, Mosaic and Eldorado. Mosaic gives the beer a bright mix of stonefruit and tropical flavors along with a big piney backbone. Eldorados are fruity and soften the finish. we keep the malt bill incredibly simple to allow the hops to take center stage in this elegant and beguiling beer.

Breakside will be celebrating the return of this popular beer and it’s bottle release at three different release parties in Portland, Eugene and Seattle.
Portland Release Party for India Golden Ale

Breakside’s lead brewer Sam Barber will be in attendance and the Beer Junction will have the India Golden Ale in bottles and on tap. More beers and details TBA.