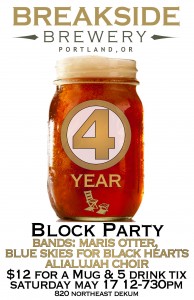 Portland, OR- It’s hard to believe it has been four years for Portland’s Breakside Brewery but hundreds of new beers, multiple Great American Beer Festival awards and a second production brewery later we come full circle with a Block Party where it all started. Next Saturday May 17th Breakside closes down the street next to their original NE Dekum brewery for an all-day tented block party with “Four” new Anniversary beers, three bands, food carts, an outdoor 21+ tented beer garden as well as a kids arts & crafts tent and full menu available inside the pub. Reaffirming their commitment to the community all proceeds from the anniversary party will go to Friends of Trees, Woodlawn Elementary School and Central City Concern.

It’s an extra sweet anniversary for the Breakside brewers who just accepted delivery of three new 120bbl fermenters from Metalcraft Fabrication that will effectively double the current production capabilities of the barely one year old production brewery in Milwaukie, Oregon. In the spirit of community the Block Party features guest beers from friends like The Commons, Gigantic Brewing and Widmer Brothers and local food purveyors Tamale Boy, P’s and Q’s Market and ice cream sandwiches from Ruby Jewel. We could not be more pleased to have some of our friends and Portland’s best local bands Maris Otter (featuring The Commons brewer Sean Burke), Blue Skies for Black Hearts and Alialujah Choir (members of Weinland, Norfolk & Western, M.Ward).

$12 entry to the 21+ outdoor beer garden includes a Breakside Mason Jar and 5 drink tickets each good for 6oz pours.

Anniversary party is free and all-ages but the beer garden tent is 21+.

Live Music in the beer garden:

Saison in Hell (Rye Saison fermented with 3 strains of Brettanomyces)