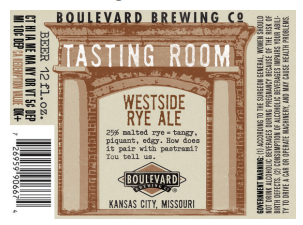 KANSAS CITY, Mo. — Beginning this month, Boulevard Brewing Company’s newest beers won’t be found on taps, in a six-pack, or even inside one of their popular Smokestack Series 750mL bottles. Along side two current year-round beers, the brewery’s new Sample Twelve package will feature three bottles each of two exclusive Tasting Room beers. The Sample Twelve will be available in all markets that carry the brewery’s current variety 12-Pack Sampler, which will be phased out and replaced permanently with the new package.
“Until now, the only way consumers could sample the beers we were working on for eventual release was in our tasting room after a tour,” said John McDonald, brewery founder and president. “With this innovative package we’ll be able to bring that tasting room experience to a wider audience, and allow us to continue challenging our brewers to create exciting new beers.”
The first two new beers included in the pack are Westside Rye Ale, a sessionable beer with a slightly spicy character, and Mid-Coast I.P.A.—at 100-plus IBU’s, the hoppiest member of Boulevard’s current family. Unfiltered Wheat Beer and 80-Acre Hoppy Wheat Beer will round out the initial Sample Twelve lineup. The package configuration will be rotated with new selections in early 2014.
About Boulevard Brewing Company
Boulevard Brewing Company has grown to become one of the largest specialty brewers in the Midwest, dedicated to the craft of producing fresh, flavorful beers using traditional ingredients and the best of both old and new brewing techniques.