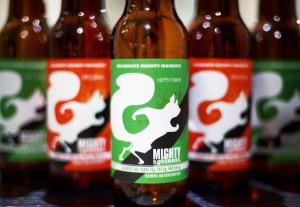 BOSTON — Mighty Squirrel, a new craft beer company based in Boston, announced it is going statewide after an enthusiastic response in Boston. The startup is also launching a third beer style, inspired by the hoppy India Pale Lager (IPL), which they have called Mighty Squirrel Hopstonian. The new beer is balanced with citrus, grapefruit, pine, and bready notes and is complemented with a floral aroma. Mighty Squirrel’s first two offerings, which launched in June this year, include Mighty SquirrelOriginal and Mighty SquirrelLight, both flavorful and refreshing craft beers containing 4 grams of protein- notably more than the typical 1 gram found in the market today, while still maintaining comparable calorie, carb, and fat content to competitive beers.

Where did the idea for a beer with 4 grams of protein come from? Co-Founders Naveen Pawar and Henry Manice met as product managers at a medical device company and soon decided they wanted to start a business together someday. The idea for Mighty Squirrel came about a year later in 2011. They loved playing tennis with friends and enjoying celebratory beers afterwards, but they wanted a brew that would fit in better at the finish line. Inspired by this, they set out to create Mighty Squirrel.

Naveen and Henry bought a home brewing system and began their kitchen experiments. As luck would have it, it has been a brewer’s top priority for the past 12,000 years to remove barley protein from beer because it affects the stability of beer. They definitely had a challenge at hand to transform their squirrel from squirrely to mighty!

After three years, many late nights, volcanic beer eruptions in the kitchen, and thousands of prototypes, Naveen and Henry finally had themselves a flavorful and refreshing beer that has 4 grams of protein, which they are excited to be sharing with the Boston community, and now the whole state of Massachusetts.

“Bundled in each of our beers, you will find a few of our favorite things: friendship, sports, entrepreneurship, innovation, and fun,” says Manice. “We hope you enjoy Mighty Squirrel and that you have many mighty moments to celebrate.”

Mighty Squirrel has been very well received in Boston over the past six months, particularly amongst sporty and active people who love craft beer. The company has gotten involved with the rock climbing community at Brooklyn Boulders and Rock Spot and with numerous running groups, and it has either created or plugged into sporting events with organizations such as the Boston Athletic Club, Tennis and Racquet Club, RaceMenu, and RACE Cancer Foundation. The beer is sold at more than 150 locations in and aroundBoston, including a mixture of grocery stores, liquor stores, bars, and restaurants in both 12oz bottles and draft.

“We would love for Mighty Squirrel to be appreciated by people looking for a celebratory beer after a good game of tennis with friends, a tough climb, a long run, a wedding, or while BBQing with friends on a Saturday afternoon,” says Pawar. “We are all about celebrating mighty moments, big or small, and we brewed a beer for the finish line to go along with those moments.”

Where to Find Mighty Squirrel

Mighty Squirrel Original, Light, and Hopstonian are available at retail locations in bottles and at bars and restaurants on draft and in bottles. For more information on Mighty Squirrel and where to buy it, please visit www.mightysquirrel.com.