In a press release, Boston Beer founder Jim Koch said the company was “proud” of its depletion growth but noted that the company is still facing headwinds as craft beer segment growth slows and competition increases. He added that the company is continuing efforts to stem the declines of its flagship beer, Boston Lager, and its new advertising campaign “has noticeably improved” trends.

“We’re finding our voice again with Jim on camera as well as how we talk about the product and how we make the product that makes us unique,” Boston Beer CEO Dave Burwick added during a call with investors and analysts.

As part of Samuel Adams’ “journey” back to growth, Burwick said the company will begin rolling out new packaging in April. He added that the new design will look “much better on shelf, with a blue block that looks super premium.”

As for Truly, Burwick said the hard seltzer brand continues to grow “beyond our expectations.” In fact, he told analysts that the company’s gross margin was lower in 2018 due to Truly’s volume growth outpacing the company’s projections, which led to production being outsourced. Boston Beer’s full-year gross margin for 2018 was 51.4 percent, down from 52.1 percent in 2017.

Burwick said the company expects to lower the costs of producing Truly this year, as it moves more production in-house. However, he acknowledged that supplemental production may be needed if Truly beats forecasts again, which would “negatively” affect the company’s margin.

“I will tell you though, we’re fully aware of what we’re doing, and we have plans in place to bring the capacity in-house once we’re convinced this is a long-term volume,” he said.

The company will also look to build upon those successes with the introduction of three new offerings in the health and wellness space: 26.2 Brew, which Burwick described as a “gose beer” marketed under the Marathon Brewing Company label; Wild Leaf, a low-calorie, low-sugar hard tea; and Tura, a shelf-stable hard kombucha containing “live probiotics and real fruit.”

The national rollout of 26.2 and Wild Leaf is “in the very early stages,” Burwick said, while Tura will launch on a more limited basis later in the first quarter.

“We think there’s a whole platform around this type of beers,” he said, noting that the Marathon Brewing label “will be a broader platform for beers within the health and wellness space.”

Meanwhile, Samuel Adams seasonal offering Summer Ale, which Burwick said “didn’t grow last year,” has been reformulated to “make it a little easier drinking for the summer.” That offering will begin hitting the market in April. 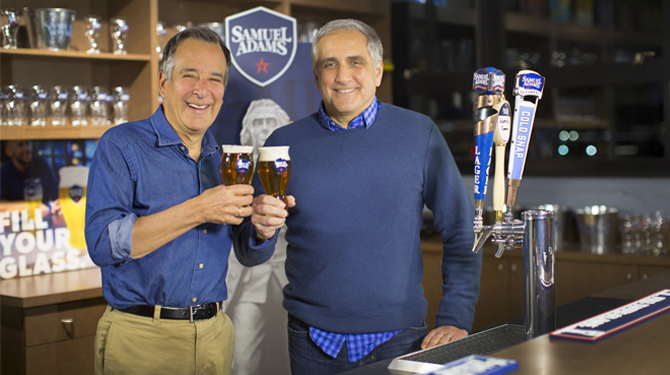 Boston Beer is off to a strong start in 2019. Through the first six weeks of the year, the company estimated that depletions were up about 12 percent year-over-year. Full-year 2019 depletions and shipments are projected to grow between 8 percent and 13 percent, the company said. Burwick added that Boston Beer is “targeting double-digit top-line growth.”

In other Boston Beer financial news, the company’s compensation committee recently approved 2018 bonuses for its top executives, including Burwick (more than $1.5 million) and Koch ($833,638) as well as CFO Frank Smalla ($626,044), chief sales officer John Geist ($626,044) and senior vice president of supply chain Quincy Troupe ($384,615), according to an SEC filing.