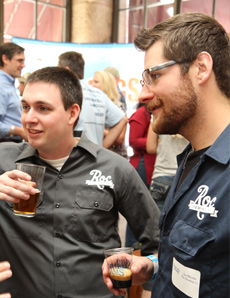 And if there was ever a question that Koch and the Boston Beer Company had somehow lost sight of that culture, a closer look at the Great American Beer Fest will tell you otherwise.

Before Koch walked across the GABF awards stage to accept the company’s four medals*, he was serving breakfast and beers at Marlowe’s for 100 of his closest friends in craft beer.

It was there that he announced the winners of the 2011 Longshot Competition — the reason why most attendees shook off the previous evenings after-hours activities and bothered to show up.

But Koch had something up that blue-jean colored long sleeve he is so famous for wearing.

Koch, who earlier this year announced that two startup craft brewers would be receiving $10,000 micro-loans as part of the “Brewing the American Dream” program, told the crowd that those brewers will also be taking part in what Boston Beer is calling the “Experienceship.” 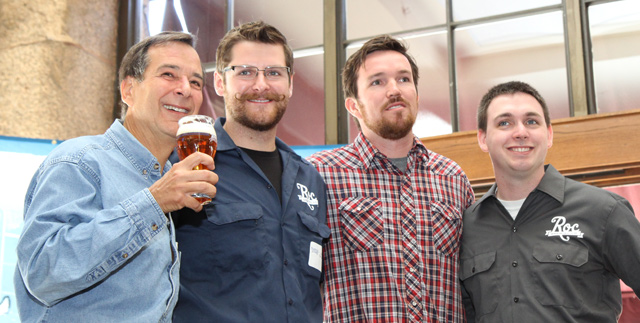 Roc Brewing’s Spinelli and business partner Jon Mervine will now be able to tap into Boston Beer’s vast resources and knowledge as they work on growing their brewery. MateVeza’s Jim Woods, who was the first craft brewer to receive the micro-loan, was also awarded the Experienceship opportunity.

“There’s real life experience and book experience, but nothing trumps learning from the experiences of people who have actually lived our dream,” said Spinelli.

And what could be better than learning from the experiences of those at the industry’s most powerful company?

“The greatest thing about the craft beer movement is the people behind it. This is a complicated industry, and gaining the tools and expertise necessary to bring MateVeza to the masses is truly a dream come true.”

The recipients will have the opportunity to receive coaching from all areas of Boston Beer’s business during four separate trips to Boston over the course of 2012.

Spinelli, who already boasts an MBA, is looking to learn more about sales and marketing while Mervine will look to learn from the company’s brewers.

“They may be the ‘big guys,’ but they are helping the little guys,” said Spinelli. “That is what craft beer culture is all about.”