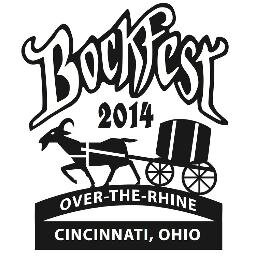 CINCINNATI, OH — Bockfest Cincinnati, a celebration of Cincinnati’s brewing heritage and the coming of spring, is ready for its 22nd annual celebration with a weekend filled with parades, parties, food, and beer from March 7-9 throughout downtown Cincinnati and the historic Over-the-Rhine neighborhood.
Bock beer traditionally is brewed for a limited time in late winter. The word “bock” means goat in German. Bock typically has a higher nutritional content and alcohol content than other beers and is brewed for celebrations and holidays. Because of the higher nutritional content, bock was used by German monks during Lenten fast, a liquid substitute for food. Bockfest is celebrated on the first full weekend of March because of this historic association with Lent.
The Brewery District Community Urban Redevelopment Corporation, along with sponsors Hudepohl-Schoenling Brewing Company and the Christian Moerlein Brewing Company, are the organizers of Bockfest Cincinnati. The Enquirer serves as the media sponsor. All of the proceeds of Bockfest go to the non-profit Brewery District CURC and their mission to preserve, promote, and redevelop Cincinnati’s brewing heritage.
The celebration begins with a parade Friday evening that starts at Arnold’s Bar and Grill, Cincinnati’s oldest saloon, and ends at Bockfest Hall in Over-the-Rhine, where the ceremonial first keg is blessed. Saturday starts with the Bockfest 5K, part of the Christian Moerlein Beer Series served up by the Flying Pig Marathon. Bockfest Hall is open throughout the weekend with live entertainment, food, brewery tours, and Saturday night features the finals of the Sausage Queen contest. Sunday is Continental Sunday, where Bockfest Hall will be the site for authentic German dancing, music, a German buffet and $1 off beer for anyone in traditional German dress.
Besides the activities in and around Bockfest Hall, several participating venues in Over-the-Rhine and the central business district will join in the Bockfest celebration, all for no admission fee. In addition, a free shuttle bus runs a continuous loop among the Bockfest sites all weekend long.
There are six establishments brave enough to place a contestant forward to represent them in the Bockfest Sausage Queen Finals, during Bockfest weekend. The schedule for the preliminary rounds is:
Precipitation Retaliation Happy Hour
Friday, Feb. 28, 5:30 p.m. to 10 p.m., Milton’s Tavern, 301 Milton Street
In 2008, Bockfest was almost entirely shut down by the largest snowfall in 20 years. A motley band of hardcore Bockfest fans took to the streets to parade through the snow, and hunkered down at Bockfest Hall to enjoy their delicious Bock beer. Unfortunately, everyone else was not so lucky and couldn’t make it to Over-the-Rhine. In 2009, Bockfest organizers felt a little retaliation was in order. A snowman effigy was acquired, and set alight at Grammer’s amid much celebration. The gods were thus put on notice, and provided a beautiful Bockfest weekend. With similar results in 2010 after burning another snowman at Milton’s, a tradition was born. Organizers cannot conclusively guarantee that they have acquired the power to control the weather in Cincinnati, but it has worked for the past three years. In 2012, in fact, this ritual is attributed to why a tornado, that was supposed to hit downtown Cincinnati, was substituted with clearing skies in time for the parade.
Schoenling Bock Beer Tapping
Wednesday, March 5, 6 to 9 p.m., Mecklenburg Gardens, 302 East University Avenue
Continuing an annual tradition, there will be a special Schoenling bock beer tapping during in advance of Bockfest. Every year, the Bloatarian Brewing League holds the Bockfest Homebrew Competition during Bockfest. The winner of the professionally judged competition sees his or her bock recipe professionally brewed as the Schoenling Bock the following year. Schoenling Bock will only be available at the tapping and Bockfest venues during Bockfest. Admission is free, with Happy Hour beer prices on the bock beers and a delicious German buffet available. No reservations will be accepted for the buffet or the tapping, but they are recommended if you want to order off the menu in the main restaurant and can be made by calling (513) 221-5353.