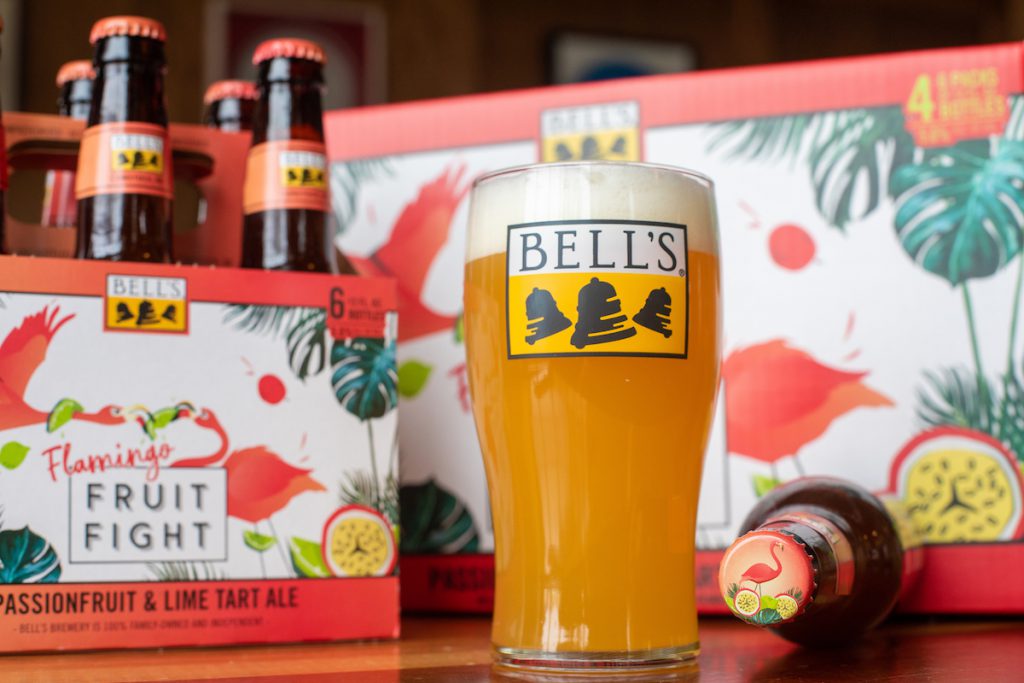 COMSTOCK, Mich. – Two flamingos walk into a bar… the latest specialty release from Bell’s Brewery is one of the things that happened next.

Originally released under the “Larry’s Latest” branding, a nod to the spirit of innovation and experimentation that started in 1985, Bell’s Flamingo Fruit Fight (5% Alc. by Vol.) is back for another round.

Tart and refreshing, this specialty release started shipping last week in 12 oz. bottles, packaged in 6-packs, and on draft. It will be available across Bell’s distribution footprint but will be limited. FlamingoFruit Fights is brewed with passion fuit and lime zest. Those ingredients are the real stars of this beer, working in a synergistic way to drive tropical and citrus aromas and flavors.

“Flamingo Fruit Fight has built up quite a following. We’ve done some experimentation on a smaller scale with our General Store Exclusive releases and this year, we’re ready to add a few new rounds to the series,” Larry Bell, president and founder of Bell’s Brewery said.

Coming up in 2021, Bell’s will release four additional variations on the original Flamingo Fruit Fight.

With the exception of Tequila Barrel-Aged Flamingo Fruit Fight, all will be released in 6-packs (12 oz.bottles) and on draft. The barrel-aged version will be packaged in 4-packs of 12 oz. bottles.

Bell’s Brewery, Inc. began in 1985 with a quest for better beer and a 15 gallon soup kettle. Since then, we’ve grown into a regional craft brewery that distributes to 43 states, in addition to Puerto Rico andWashington DC. The dedication to brewing flavorful, unfiltered, quality craft beers that started in 1985 is still with us today. We currently brew over 20 beers for distribution as well as many other small batch beers that are served at our pub in Kalamazoo, the Eccentric Cafe. Our ongoing goal is to brew thoughtfully, creatively and artistically. 100% family-owned and independent, we strive to bring an authentic and pleasant experience to all of our customers through our unique ales and lagers. For more information, please visit bellsbeer.com.