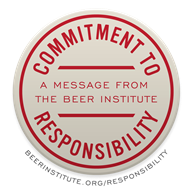 WASHINGTON, DC – The holiday season is always a time of festive gatherings, celebrations and parties. This makes it the right time to remind people to drink responsibly and to not drive drunk. To help send that message, the Beer Institute is partnering with members of Congress to record and distribute public service announcements asking the public to share our industry’s Commitment to Responsibility.

As of today, more than 30 members of Congress, from both the U.S. House of Representatives and the U.S. Senate, pitched in to record responsibility PSAs as part of the Beer Institute’s inaugural program.

Through this effort, the Beer Institute hopes to work with elected officeholders in order to send a powerful message about drinking responsibly: “Get a designated driver. Find a safe ride home. And have a safe and happy holiday season.”

“We want to remind the public that drunk driving is never acceptable,” said Jim McGreevy, Beer Institute President and CEO. “The thousands of men and women that work for our country’s brewers, beer importers and industry suppliers are committed to this issue. We are parents and neighbors ourselves, and want the roadways safe in our communities. It’s an honor to work with lawmakers to help their constituents.”

According to the U.S. Department of Transportation, drunk-driving fatalities have decreased 52 percent since 1982 and 14 percent in the past five years. Brewers and beer importers are committed to ending this preventable issue, and invest in a host of community-level programs to promote safe rides home, designated drivers and responsible drinking.

To learn more about the Beer Institute’s Commitment to Responsibility, please visit www.BeerInstitute.org/responsibility. The PSAs can be streamed and downloaded through SoundCloud or the National Association of Broadcasters PSA portal.