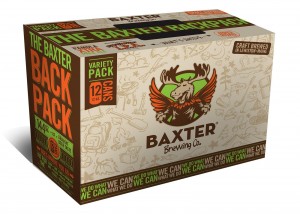 LEWISTON — AUBURN, MAINE: Baxter Brewing Company, the acclaimed all-cans craft brewery in Lewiston, Maine that was the first of its kind in New England, will be available throughout northern New England in convenient 12-can boxes, beginning in January. “People have been asking for this option from the very beginning,” explained Luke Livingston, Baxter’s founder and CEO. “Cans are already the most portable kind of packaging in the industry, and packing them in cardboard 12-packs makes them even more convenient. Our ‘Backpacks’ will have three cans of each of the three production beers, plus three of the current seasonal.” In January, assortments will include Pamola Xtra Pale Ale, Stowaway IPA, Amber Road amber ale and Phantom Punch Winter Stout. “This is another benefit of our recent expansion,” Livingston said. “They should be available everywhere, but we expect early demand to be pretty heavy, so you’d better pick one up when you see it!”

Named the Best New Brewery in the U.S. for 2011 by the beverage industry’s BevNET Magazine, demand for Baxter’s beers has exceeded supply since its inception. But the brewery’s recent expansion increased total capacity to more than 30,000 barrels/year, “and that expansion also enables us for the first time to package some of the extraordinary small batch beers that have previously only been available by the glass in our tap room, in Lewiston (Maine),” Livingston said. “In our eyes, there is no better time to do that than in conjunction with the celebration of our third anniversary. So we’ll be distributing a limited edition beer we’re calling On the Count of Three in all of our states, from about mid-January for only as long as they last; one batch, one shipment only.” On the Count of Three is an Imperial Hefeweizen, a style that doesn’t really exist. A traditional hefeweizen, or weissbier, is a German beer brewed with a relatively large proportion of wheat (typically around 50%), not many hops, and fermented with an unusual strain of yeast that produces flavors like cloves, banana and bubblegum. These beers are staples in their homeland of Bavaria, and at around 5% A.B.V. they’re great everyday beers. Baxter’s “Imperial” weissbier takes the traditional elements of this style, including an authentic Bavarian yeast strain, and adds some American ingredients to make it celebratory. At 7% A.B.V. it’s much stronger than the traditional version.

“I’m excited to brew and drink On the Count of Three,” says Director of Brewing Operations, Ben Low. “I’ve always been passionate about brewing traditional German styles, and this beer combines one of my favorites, weissbier, with lots of hops, which we’re really good at using at Baxter. It’s a change of pace, too, because we’re using some great hops we haven’t used here before, and we’re using a yeast other than our house strain for the first time. That’s a big challenge, but a lot of fun too, and our third anniversary is a great excuse for both.”

“Thanks to Ben and his program of encouraging everyone at Baxter to develop their own specialty recipes, we’ve been serving an outstanding range of small batch beers in our tap room,” Livingston said. “But until now we haven’t been able to produce enough of our ‘normal’ beers to take the time out and package any of these one-off varieties. We’re thrilled to be able to celebrate our anniversary by sharing this extraordinary limited edition beer with our friends all around the region.”