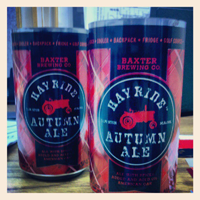 LEWISTON, ME – Baxter Brewing Company and DaVinci’s Eatery will present: the third and final concert in their Bates Mill Summer Concert Series, with Pete Witham & The Cozmik Zombies (Portland) and The Pete Kilpatrick Band (Brunswick), this Friday, September 7th.

But that’s not all, the concert is also the official release of Baxter’s new seasonal brew, Hayride Autumn Ale! Get it here first before cans start hitting store shelves next week.

Featuring The Pete Kilpatrick Band from the music mecca of the northeast, Portland, Maine, this is a musical event unprecedented in the L-A community. The band has been writing, recording, and performing regularly since 2004 and has released six independent albums to date including their most recent, Heavy Fire (2012). They have been named Maine’s best act four times in the Portland Best Music Awards and have performed over 1,000 shows since their formation, sharing the stage with such notable acts as Dave Matthews Band, Grace Potter and the Nocturnals, The Wailers, Dawes, and Blues Traveler, and they have been nominated in the 2012 Maine Best Music Awards for Best Act and Best Male Vocalist. They were featured performers at the Sundance Film Festival this year, as well.

All shows are 21+; gates open at 6, shows at 6:30; in the Lewiston’s Bates Mill Fountain Courtyard, midway between Baxter Brewing (130 Mill St.) and DaVinci’s (150 Mill St.). Tickets can be purchased through Brown Paper Tickets, or in-person at Baxter Brewing Thurs-Sunday. For more info, please call (207-333-6769) or email (info@baxterbrewing.com) the brewery. Note: Tickets purchased for the original date of this show (8/17), which was rained out, will still be honored