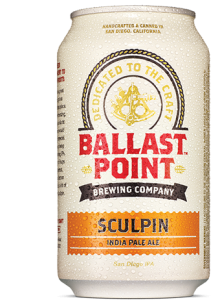 “We’ve had great interest in our brands throughout the Midwest and people have been asking for years when we’d come to Wisconsin,” said Jack White, CEO & Founder, Ballast Point. “It’s really fantastic to have that kind of appeal and support and, it’s even better to be doing it with an experienced partner we know and trust. Wisconsin is an incredible craft state and we look forward to growing here.”

Established in 1996, Ballast Point is known for constantly exploring new flavors and techniques in its beers and spirits. As a result, the San Diego-based company has earned industry acclaim with gold medal awards at the World Beer Cup and Great American Beer Festival and most recently being named “California Distillery of the Year” for the second year in a row. The Ballast Point portfolio includes more than 50 styles of beer including IPAs, pale ales, amber ales, porters and wheat beers, as well as a family of craft spirits that includes gin, rum, vodka and whiskey.

“We like to align ourselves with great craft producers that we see as long-term partners,” said Nate Phippen, VP of Sales & Marketing, Wirtz Beverage Wisconsin. “We’ve helped develop the Ballast Point portfolio in other markets and today, they’re some of the best-selling. We’re excited to hit-the-ground running in Wisconsin, a growing craft market, and make a real impact with Ballast Point.”

Ballast Point’s widely popular Sculpin IPA, along with a handful of other top beer brands, and a core selection of the company’s spirits will be available at restaurants, bars and retail accounts when it launches into the state. Product offerings will expand through the year.

“We’re extremely proud of our roots but it’s exciting to get into new markets and see what’s happening there. From the marketplace to our beer, our philosophy is all about exploring,” continued White.

What started in 1996 as a small group of home brewers who simply wanted to make great beer evolved into the team of adventurers known as Ballast Point. From bringing a hoppy twist to a porter, or adding four types of malt to its amber ale, to creating a breakthrough gold-medal winning IPA, the San Diego-based company is known for adding its own touch and asking if there’s a better way. Today, an internationally recognized leader in the craft brewing and spirits industry, the company makes over 50 styles of beer and bottles 13 spirits. For more information, visit www.ballastpoint.com.

Wirtz Beverage Wisconsin is a statewide leader in the distribution of fine wine, spirits and beer brands. The company combines its time-honored tradition of execution excellence with a reputation for best-in-class service and brand building throughout Wisconsin.

The company is a member of Wirtz Beverage Group, a leading wholesaler and broker with interests in Illinois, Iowa, Minnesota, Missouri, Nevada and throughout Canada. A family-owned business, Wirtz Beverage Group has nearly $2 billion in annual sales and 2,500 employees.