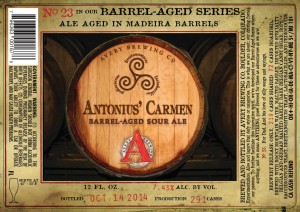 Boulder, CO — Antonius’ Carmen is a sour ale aged in Madeira barrels, a type of barrel Avery has never before explored.

“I love Madeira,” says Founder and CEO Adam Avery, “because it’s sweet and interesting and old. But it’s hard to find Madeira barrels, so as soon as they became available, we snatched them up because we wanted to give this a shot.”

Rather than make a sweet beer and then add more sweetness from the Madeira, Avery’s brewers wanted to make a sour beer to contrast the flavors from the barrels. “We wanted to put the essence of Madeira into a beer, and Antonius’ Carmen has a hint of the caramel that is the backbone of Madeira.”

Avery’s Chief Barrel Herder Andy Parker says Antonius’ Carmen “has aromas of dark cherries, and lots of ‘em, with a very clean, lactic sourness and a tannic dryness from the oak.” Says Parker, “This tastes totally different from any sour we’ve ever done because those barrels are baller.”

Working with Madeira barrels is a new frontier of experimentation for Avery Brewing, but their experience helped them design a beer from scratch that would marry well with the Madeira flavors. “If we’d gotten these barrels six years ago, we would have made a beer that overwhelmed the barrels,” says Parker. “But we’ve aged beer in so many types of barrels—rum, tequila, Bourbon, chardonnay, Cabernet S auvignon, zinfandel, rye whiskey—that we could try the Madeira that came from these barrels, accurately predict what the barrels would add to the beer, and then build the beer around that.”

Antonius’ Carmen will only be sold through the Avery Tap Room, and will debut at their release party on Sunday, October 26 with bottle sales beginning at 1pm. Bottles are 12oz. and will be sold for $12 each. Only 291 cases were produced and fans will be able to buy up to 12 bottles. The line party will start at 11am and will feature rare beers on draft including Drew’s Fuzzy Peach, Karmarita, Papa Sour, Eremita V, The Preacher, 2013 Mephistopheles’ Stout, and Vanilla Bourbon Coffee Chocolate Stout.

Established in 1993, Avery Brewing Company has developed a reputation as being one of the most daring and visionary breweries in the nation. They are the brewers of Avery IPA, White Rascal Belgian-Style White Ale, The Maharaja Imperial IPA, Mephistopheles’ Stout and more than 20 other year-round and seasonal beers. For more information, beer connoisseurs can check www.averybrewing.com, email info@averybrewing.com, and follow Avery’s Facebook page and Twitter feed for the latest news.