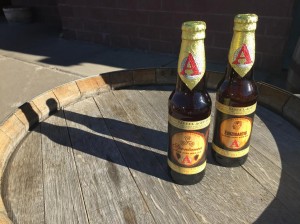 Boulder, CO – This Sunday Avery Brewing Company is having a party in honor of No. 24 and No. 25 in their Barrel-Aged Series, Spontanea and Einzigartig. This is Avery’s second time to release grape-beer hybrids, a rare category that incorporates both malted barley and grape must. Adam Avery, founder and CEO of Avery Brewing, says, “They came from our love of stretching the boundaries of what beer can be.”

The Cabernet Sauvignon grapes in Spontanea and the Riesling grapes in Einzigartig come from Bookcliff Winery in Boulder. The Avery brewers asked their friends at Bookcliff to not put sulfites on the grapes so they could experiment with whatever yeasts were living on the skins, and the result surprised them all.

For Spontanea, Cabernet Sauvignon grapes were carefully hand-shoveled into a tank alongside malted barley. The brewers then waited for 3 days to see if the grapes’ wild yeast would induce fermentation, but nothing happened. Just as they were about to add yeast, the brew began bubbling and within 5 days fermentation was complete. The Avery brewers put this 100% spontaneously fermented beer into neutral oak barrels and aged it for a year, resulting a unique barrel-aged beer with 30% of the fermentables coming from grapes.

“Spontaneously fermented beers can sometimes taste like cheese or sulfur or sweatsocks,” says Avery Chief Barrel Herder Andy Parker. “So I was surprised that Spontanea turned out so clean. It has earthy notes, brett funk, and some mild oak tannins that meld together with a bright acidity that I love.”

Einzigartig is also a grape-beer hybrid, yet it is a very different beer from Spontanea. Says Parker, “We’d never used Riesling grapes before, so we thought it’d be interesting to use a strain of Brettanomyces that has similar tropical fruit flavors to Riesling grapes.” The brewers added the juice from Bookcliff’s Riesling grapes to the tank along with wort made from malted barley, then pitched a “Brett” yeast strain from their friends at Crooked Stave. They then aged the beer in neutral oak barrels for a year, resulting in what Parker calls “a bright sparkly beacon of goodness”.

“You don’t see many grape-beer hybrids, especially outside of California wine country,” says Parker. “But there’s a giant world to be explored of interesting flavors, so we’re happy we can simultaneously release two of these rare blends in our hometown.” He added, “Beer and wine are my two favorite fermented beverages, so yeah, I’ll be bringing home some bottles.”

Spontanea and Einzigartig will be released on Sunday, December 14 at the Avery Tap Room in Boulder. Bottle sales begin at 11am with a 12 bottle limit of each beer per person. Exclusive beers will be tapped at 11am featuring Eremita VII, Brett Karma, Antonius’ Carmen, caffeinA, Khodynka, 2012 Beast, Bourbkin, and Tweak. Avery expects this will be the last Barrel-Aged Series release party in their current location, as they will be moving to their new brewery in the Gunbarrel neighborhood of Boulder early next year.

Established in 1993, Avery Brewing Company has developed their reputation as being one of the most visionary breweries in the nation. They are the brewers of Avery IPA, White Rascal Belgian-Style White Ale, The Maharaja Imperial IPA, Mephistopheles’ Stout and more than 20 other year-round and seasonal beers. For more information, beer connoisseurs can check www.averybrewing.com, email info@averybrewing.com, and follow Avery’s Facebook page and Twitter feed for the latest news.