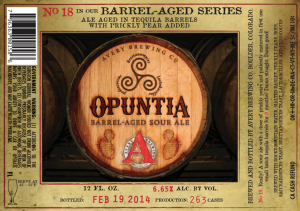 That’s the simple description Avery Brewing Company offers to describe a complex beer. Opuntia, No. 18 in the Barrel-Aged Series, is a light sour ale (6.65% ABV) that’s Avery’s first release of a beer aged in tequila barrels and unlike anything the brewery has ever produced before.

“It sounds paradoxical to discuss ‘clean’ as a focus when talking about a beer with so much complexity,” said Avery Chief Barrel Herder Andy Parker. “We tailored this beer from the ground up to create a balance of four flavors: prickly pear, tequila barrels, Brettanomyces and a nice lactic sour. We wanted it to be simple enough to let each flavor shine and let the complexity come from the combination of those four flavors that we have never had in a beer before.”

Parker said he developed the recipe after meeting the crew from Suerte Tequila, which involved a lot of tequila drinking (obviously), an instant friendship and an offer by Suerte to provide some barrels. Having never worked with tequila barrels before, Parker said he experimented with the first four barrels by adding a different type of beer to each. Those experiments led to a couple limited Tap Room exclusives, but more importantly, Parker said it helped him better understand the nuances of tequila barrels. Considering what he had learned he developed the idea for Opuntia and excitedly awaited his next batch of barrels from Suerte.

The base beer for Opuntia is a light ale comprised of two specialty malts with primary fermentation in steel tanks with Avery’s house ale strain. From there the beer was moved to the tequila barrels and Brettanomyces and Avery’s house Pediococcus and Lactobacillus strains were added for secondary fermentation and souring. After four months of souring the prickly pear was added and the beer was allowed to age an additional five months.

“This one was all Andy and it’s awesome,” said Adam Avery, the brewery’s founder. “I couldn’t be more proud of him. He developed a relationship with our new friends at Suerte. He developed a great idea and recipe. And then he executed the brew and the blend perfectly. The dude blows my mind.”

Only 263 cases of Opuntia were produced. The Avery Tap Room in Boulder, CO, will host the release of Opuntia, starting sales at 1pm on Sunday, February 23rd, 2014. Bottles are 12oz. and will be sold for $12 each. Fans will be able to buy up to 12 bottles, and availability can only be guaranteed at the Avery Tap Room during the release party until the beer runs out. The line party will start at 11am and will feature rare beers and Tap Room exclusives. For more information, beer connoisseurs can checkwww.averybrewing.com or email info@averybrewing.com or check out Avery’s Facebook page at facebook.com/averybrewing.