Molson Coors Beverage Company today announced plans to fully acquire Atwater Brewery, a transaction that has been discussed on and off for the last couple of years, according to Mark Rieth, who has owned the Detroit craft brewery outright since 2005.

“We’ve been in heavy communication with them for probably the last two years on and off,” Rieth told Brewbound. “And then they went through their restructuring and revitalization plan, and we started having serious conversations over the last six months, and it kind of escalated up.”

The transaction is expected to close in the next couple of months. Rieth and Atwater’s management team will remain in place and guide the craft brewery’s daily operations.

“For us, our brand, a 23-year-old brand, a regional brewery, it just makes all the sense in the world for us to partner with them, especially with all of their other strategic partnerships that they’ve done in the past,” he said.

In Atwater, Molson Coors gains the the 83rd largest Brewers Association-defined craft brewery and the fifth-largest craft brewery in Michigan, a geography in which the company doesn’t operate a brewery. Bell’s Brewery remains the largest BA-defined independent craft entity in the state, as Atwater will no longer fall within the trade group’s definition of a small and independent.

Reith said he doesn’t fear backlash over his company no longer being considered “craft” in the eyes of consumers.

According to Rieth, finding a strategic partner was the right move for Atwater, as competition has stiffened in recent years. Rieth pointed to Molson Coors-owned Leinenkugel’s as a blueprint for what he’d like to see for Atwater’s future.

“The family is still involved in the day-to-day operations 30 years later,” he said. “That’s exactly what I want for our brand is to be around for decades.”

Paul Verdu, vice president of Molson Coors’s craft division Tenth and Blake, told Brewbound that although the company hasn’t been active in making craft deals, it has engaged in numerous conversations. In the time in between the Revolver and Atwater deals, Verdu said the company and its craft acquisitions have been learning how to work together and add value.

Asked if the lowering of valuations for craft breweries played a role in Molson Coors making a move, Verdu declined to speak to valuations. However, he said the company’s criteria for potential acquisitions includes “what the partner brings to the table, how strong the brand is, what upside we think there is, the people who run it. Are they going to be people that we love working with for years to come? All of those factors were important for us.”

Verdu said Molson Coors was attracted to Atwater due to its “strong brand” and portfolio of beers.

“They’ve kept it fresh,” he added. “For us, winning in core geographies will always be the most important thing. If you look at the beer brands that we’ve acquired over the last few years, winning in and around where they’re from has always been the No. 1 source of growth. So we still think there’s tremendous upside in southeast Michigan and across Michigan overall and then eventually some of the surrounding Great Lakes states.”

Collectively, Molson Coors’ four acquired brands increased volumes 16.2% in 2019, according to the the company’s blog, citing Nielsen all-outlet and convenience store data through December 28. Those numbers don’t include Saint Archer Gold, which has received a national push from the company. Factoring in Gold, the Tenth and Blake portfolio’s volume is up nearly 19%.

Of its craft partners, Molson Coors has focused on taking one brand national thus far: Saint Archer Gold, the company’s low-calorie, low-carb answer to Anheuser-Busch InBev’s Michelob Ultra in the super premium space. Molson Coors is investing in regional ads for the brand during this year’s Super Bowl, in order to skirt Anheuser-Busch’s exclusivity over the game.

Although Molson Coors’ craft M&A was dormant for about four years, the company has made moves, including acquiring a minority stake in California-based non-alcoholic beverage incubator L.A. Libations. 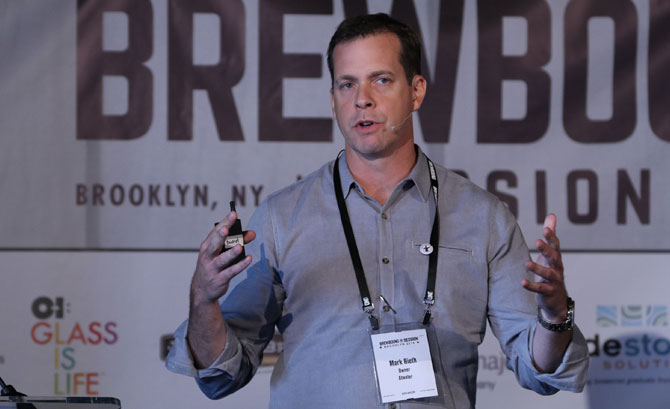 Rieth had positioned Atwater as a potential acquiree of Molson Coors dating back to 2017 when the craft brewery realigned its wholesaler network in Michigan, moving from Kalamazoo-based Imperial Beverage into the M1 Network of 10 Molson Coors wholesalers.

“With us aligning to the MillerCoors network at that time, it makes all the sense in the world,” he said. “Michigan is pretty much aligned and now we can look at some other potential areas for realignment.”

Although those wholesaler moves were made independently, Verdu said the aligned network helps “now that the dust has settled.”

“It’s not that we’re fully aligned, and we’ll address those issues as the time comes down the road, but to be primarily aligned is an important thing for us,” he said. “But it wasn’t us influencing him to make those decisions. Those would have been two independent processes working, but in the end, it happened to work out well.”

Rieth said the company will look at alignment “case by case” as it integrates into Molson Coors, which he expects 2020 to serve as a transition year.

“But in the interim, it’s, let’s grow our core Detroit-out, Michigan-out, and we’ll look at other markets in the years to come,” he said.

According to Rieth, he’s excited about the prospects of Atwater’s innovation team working with Molson Coors. Last summer, Atwater launched a line of hard seltzers called Spiked Sparkling Water as a craft play into the hard seltzer category, which could top $4 billion in 2020.

“We really believe that the true opportunity lies in the beer portfolio,” he added.

In a press release announcing the acquisition, Molson Coors noted that the transaction fits within the company’s overall revitalization plan, which kicked off in October. That plan calls for reinvesting $150 million annually in its core products, above-premium offerings and new innovations in the beyond beer space. That plan also led to the company shedding about 500 jobs, closing the company’s offices in Denver and making Chicago its North American headquarters. In the months since, the company has also announced plans to shutter its Irwindale, California, production facility.

Atwater operates a production facility with about 20,000 barrels of capacity in Detroit, and also brews at contract facility Brew Detroit under an alternating proprietorship. The company also operates taprooms in Grand Rapids and Grosse Pointe Park.

Rieth said there has not been a determination on whether that production would shift to Molson Coors’ factories, with the closest production facility located about four hours south in Trenton, Ohio.

“We’ll make those decisions as part of our integration plan,” he said.

*Correction: Atwater is the fifth largest craft brewery in the state. This story incorrectly referred to the Detroit brewery as the fourth largest.