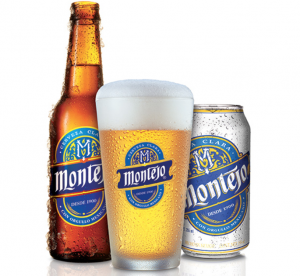 ST. LOUIS — Beer drinkers in the southwestern United States can quench their thirst for a unique, refreshing and authentic Mexican lager when Montejo arrives at bars, restaurants and at grocery and convenience stores in September. Anheuser-Busch will import Montejo — a golden lager beer with more than 100 years of Mexican brewing tradition. The launch of Montejo marks the first import from Mexico to the United States by Anheuser-Busch.

With origins in Mexicos’s Merida, Yucatan, Montejo is brewed at Cerveceria Modelo S. de R.L. de C.V. in Tuxtepec, Oaxaca, Mexico. Perfect for parties and outdoor refreshment, Montejo is best enjoyed in a wide-mouthed glass and pairs well with Mexican cuisine. “Our brewmasters have perfected the Montejo recipe using time-honored Mexican brewing traditions. The result is a bright, smooth and full-flavored lager with a crisp finish,” said César Enrique L├│pez Pineda, Montejo head brewmaster. “It’s an honor to make this regional favorite available to beer drinkers outside of Mexico for the first time.”

According to Ryan Garcia, Anheuser-Busch vice president of regional marketing, “Mexican beers account for nearly 60 percent of imports, and we are responding to consumer demand for an authentic and distinctly Mexican lager.”Anheuser-Busch will put muscle behind Montejo’s launch in California, New Mexico, Arizona and Texas with an integrated advertising and marketing campaign that includes Hispanic targeted radio, digital, print, experiential and outdoor advertising. Los Angeles, Houston and San Antonio residents will also catch a glimpse of one of Mexico City’s most iconic images — classic VW Beetle “vocho” taxicabs — delivering Montejo samples to legal-age adults during various local events and festivals.

Montejo local market launch activities will pay homage to the brand’s deep heritage and personality. In Los Angeles, Montejo will sponsor the GRAMMY┬« award-winning Los Tigres del Norte — a norte├▒o-style ensemble band based in California. The band will be honored Aug. 21 with a star on the Hollywood Walk of Fame and a VIP after-party where guests will enjoy Montejo as the exclusive beer sponsor.

Montejo contains 4.5 percent alcohol by volume (ABV) and will initially be available in packs of 12 12-ounce cans and six 12-ounce bottles.