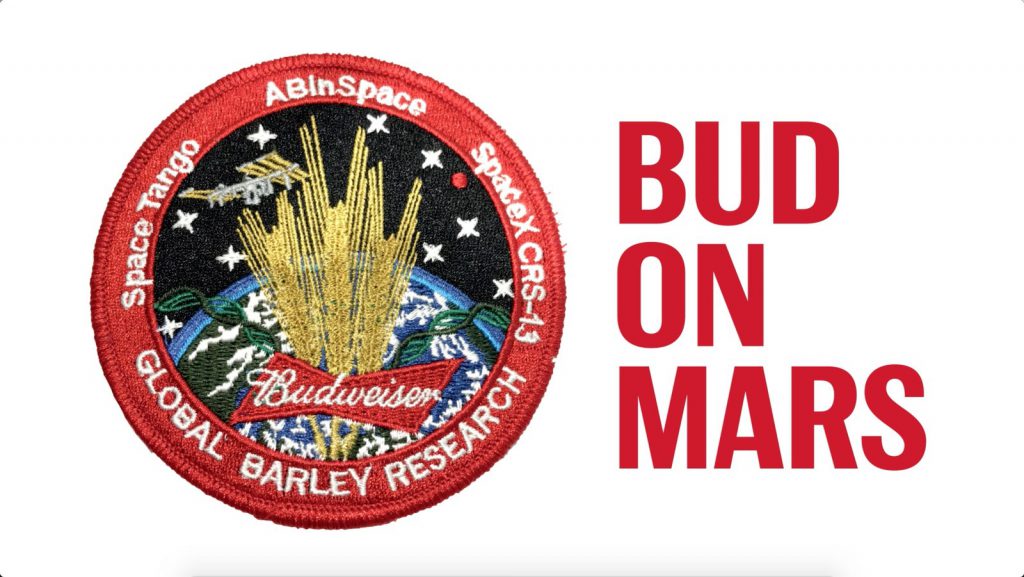 NEW YORK — Budweiser is upholding its commitment to be the first beer on Mars by confirming upcoming experiments on the International Space Station with plans to send and study barley – one of its key ingredients – into space in early December. The reason? Earlier this year at the South by Southwest conference, Budweiser announced its goal to be the first beer on Mars – offering a colonized red planet the same enjoyments provided here on earth, including fresh beer! And while socializing on Mars might be in the near-distant future, Budweiser is taking steps now to better understand how its ingredients react in microgravity environments so that when we get to Mars, Budweiser will be there.

Budweiser Takes Next Step to Be the First Beer on MarsBarley seeds, a key ingredient in Budweiser’s recipe, will be sent to space and reside on the International Space Station to see how they react in a microgravity environment.As shown here, the barley seeds will be placed in Space Tango CubeLabs™, shoebox-sized facilities that host small-scale experiments, on SpaceX’s CRS-13 mission. The seeds will be in orbit for approximately 30 days, before being brought back down to earth for Budweiser’s innovation team to analyze.The barley seeds will live and grow within a Space Tango CubeLab™, a shoebox-sized facility that hosts small-scale experiments. These experiments on the International Space Station are the first of many steps Budweiser will take to reach its larger goal of creating a microgravity beer for Mars.Budweiser Takes Next Step to Be the First Beer on Mars.

To kick-start its research on microgravity beer, Budweiser is partnering with experts in the field, including CASIS* who manages the International Space Station U.S. National Laboratory, and Space Tango, a payload development company that operates two commercial research facilities within the National Lab. Together the group, along with Budweiser’s innovation team, will initiate two barley experiments via SpaceX’s upcoming cargo supply mission, scheduled to launch on December 4 from Cape Canaveral Air Force Station, Florida. Once on the International Space Station, Budweiser’s barley will stay in orbit for approximately one month before coming down to be analyzed.

“Budweiser is always pushing the boundaries of innovation and we are inspired by the collective American Dream to get to Mars,” said Ricardo Marques, vice president, Budweiser. “We are excited to begin our research to brew beer for the red planet.”

Budweiser’s innovation team selected barley, one of its core ingredients, to be the focus of the first two experiments in space. Malting barley is a process that results in the high-quality malt used in the Budweiser enjoyed today and the research on the International Space Station will unveil how the barley seeds react in a unique microgravity environment. One of the experiments will focus on barley seed exposure with the second testing barley germination. Not only will the research offer insights on steps to creating beer on the Red Planet, but it could also provide valuable information on the production of barley and the larger agricultural community here on earth.

Scheduled to launch on Monday, December 4, twenty Budweiser barley seeds will be sent to the International Space Station, packaged in two Space Tango CubeLabs™ on SpaceX’s CRS-13 mission. The seedlings will be in orbit for approximately 30 days, before being brought back down to earth for Budweiser’s innovation team to analyze – setting the foundation and blueprint for Budweiser’s next move in brewing the beer of the future.

*CASIS stands for Center for Advancement of Science in Space, a non-profit, non-government organization that acts as the manager of the research facility on the International Space Station, with a focus on enabling a new era of space research to improve life on Earth.

Budweiser, an American-style lager, was introduced in 1876 when company founder Adolphus Busch set out to create the United States’ first truly national beer brand – brewed to be universally popular and transcend regional tastes. Each batch of Budweiser stays true to the same family recipe used by five generations of Busch family brewmasters. Budweiser is a medium-bodied, flavorful, crisp and pure beer with blended layers of premium American and European hop aromas, brewed for the perfect balance of flavor and refreshment. Budweiser is made using time-honored methods including “kraeusening” for natural carbonation and Beechwood aging, which results in unparalleled balance and character.