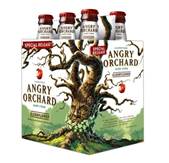 CINCINNATI — Angry Orchard, the number one selling hard cider in the U.S.*, is releasing a new cider style from its collection — Angry Orchard Elderflower Hard Cider, the first cider of its kind. Inspired by the European tradition of elderflower cordials which dates back to ancient Roman times, the cider makers at Angry Orchard have crafted a unique hard cider that balances elderflower’s subtle floral notes and tropical fruitiness with Angry Orchard’s crisp apple sweetness.

“For centuries, elderflower has been used as an ingredient because of its delicate floral notes. It also has a great fruity flavor reminiscent of tropical fruits like lychee, pear and citrus, which makes it a great match for the rich, fruity flavors found in the culinary and bittersweet apples we use in our cider,” said David Sipes, Cider Maker for Angry Orchard. “This combination of flavors produces a complex yet balanced, slightly sparkling cider we think is unlike anything our drinkers have experienced.”

Launched nationally in 2012, Angry Orchard has quickly become a favorite among drinkers for its unique, quality ingredients and distinctly crisp and refreshing taste. Angry Orchard hard ciders, including the new elderflower style, are crafted with a unique blend of Italian culinary apples and French bittersweet apples. Angry Orchard in part gets its name because, unlike ordinary apples, bittersweet apples are described as “angry” because of the tart and tannic characteristics they impart to cider creating real apple flavors, and also because of the way they look, small and unattractive.

These bittersweet apples are unique to cider making, just like wine grapes are to wine making. Also similar to wine, Angry Orchard ciders go through a lengthy fermentation process and are aged on oak, resulting in an exceptional blend that contributes to the complex flavor profile of each Angry Orchard cider style, including the new Angry Orchard Elderflower Hard Cider.

Hayley Jensen, a mixologist and beer sommelier at Taproom No. 307 in New York City and engaged by Angry Orchard for her expertise, has seen firsthand how elderflower has also recently become a go-to flavor for mixologists and a drinker favorite.

“Elderflower burst onto the cocktail scene recently and the flavor became a runaway hit — it’s refreshing and light, with a touch of sweetness that pairs perfectly with more dominant flavors. Today, I see a trend of more drinkers asking for cider. So, a cider with a delicate elderflower taste is truly an innovative combination and also a great mixology ingredient, pairing well with light spirits like gin, vodka, white tequila and also jenever, an up-and-coming liquor in the U.S.,” says Jensen. “I think cocktail, wine and craft beer lovers will all enjoy this new cider.”

Hard cider has exploded in popularity recently, growing 65 percent in 2012 vs. 2011, especially remarkable when compared to the growth of beverages like wine and craft beer, which grew 5.6% and 13% respectively.**

All Angry Orchard styles offer remarkably crisp, refreshing and distinct flavors for any palate and are naturally gluten free:

About Angry Orchard:
Angry Orchard Cider Company’s cider makers have been experimenting with apple varieties and unique flavors to develop cider recipes for more than 15 years. Angry Orchard’s hard cider line-up — Crisp Apple, Apple Ginger, Traditional Dry, and most recently, Elderflower — are made from hand-picked European apples that are a blend of Italian culinary apples from the Northern Alps and French bittersweet apples from Normandy. The juice goes through a lengthy fermentation process, including oak-aging for optimal complexity and balance, before it is bottled.