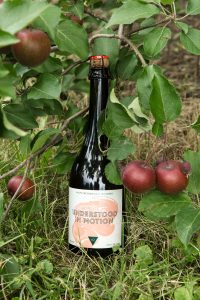 Collaborations like this, commonly popular among craft brewers, give cider makers the opportunity to combine techniques and apple varieties to develop something completely new, allowing drinkers to experience an innovative and unique cider. As the second release within this collaboration series, Understood in Motion 02 pays homage to traditional cider making, yet uses experimental wild fermentation techniques taking place at both Angry Orchard and E.Z. Orchard’s cider houses. Understood in Motion 02 is an expert blend of both wild fermentations, resulting in a dry, balanced cider that showcases a bittersweet apple flavor with notes of raw honey and oak. The collaboration cider will be available for purchase in select locations in Oregon and Angry Orchard’s Cider House in Walden, NY.

Understood in Motion 02 was crafted with carefully selected apples from both the east and west coasts: Bittersweet Muscadet de Lense and Marie Menard from Oregon, and heirloom, acid-forward Gold Rush and Northern Spy from New York. Both the Pacific Northwest and New York State have a rich history of apple growing, thanks in large part to the terroir of the region. Each region’s sunlight, temperature, and soil impart distinct qualities to the fruit, such as low acidity in the Pacific Northwest and high acidity in Walden, which are the foundation for this cider.

The fruit was juiced and naturally fermented in a process that requires very little intervention but lots of careful attention. The result is a still, dry cider with just a touch of residual sweetness, and like wine, meant to be shared, paired with a great meal, and enjoyed with friends.

“At Angry Orchard, we’re constantly striving to create interesting ciders to enhance and grow America’s cider culture,” said Ryan Burk, Head Cider Maker at Angry Orchard. “E.Z. Orchards Cider Maker Kevin Zielinski is a long-time friend and mentor. It was a privilege to work with him on a cider that pays homage to traditional cider making, yet uses experimental wild fermentation techniques.”

The team at E.Z. Orchards is first and foremost orchardists, with a deep passion for cider’s main ingredient: the apple, and the orchard grows apples with specific cider blends in mind. Like E.Z. Orchards’ approach to its orchard, the cider makers at Angry Orchard are in pursuit of producing only the highest quality ciders, traveling the world to find unique apple varieties and ingredients to develop inventive and refreshing styles for drinkers to enjoy. Angry Orchard’s most popular style, Crisp Apple, is made with bittersweet and culinary apples from Europe, striking the perfect balance between sweet and dry. In addition to the flagship cider, Angry Orchard makes a variety of cider styles, including specialty ciders available only at the Cider House in Walden, New York—the cider’s home for research and development.

“Understood in Motion 02 is a product of the nuances between the fruits of the Northwest and Northeast regions,” says Kevin Zielinski, Founder and Cider Maker at E.Z. Orchards. “We enjoyed working closely with our East Coast friends at Angry Orchard, from selecting the apples to blending the fermented cider.”

More about the cider:

The Backstory: While hailing from opposite ends of the country, the cider makers at both Angry Orchard and E.Z. Orchards are focused on producing hard ciders using innovative techniques and high quality ingredients. Understood in Motion 02 began at the 2016 Seattle Cider Summit where the cider makers connected and decided to create something that merged their cider making techniques and local apples.

To find where Angry Orchard hard cider is available near you, visit the “cider finder” at www.angryorchard.com/cider-finder.

Angry Orchard Cider Company’s cider makers have been experimenting with apple varieties and unique flavors to develop hard cider recipes for 20 years. The cider makers have travelled the world to find the best apples for cider making and chose specific varieties, like French bittersweet apples from Normandy and culinary apples from Italy and the United States, based on each cider’s flavor profile. In November 2015, Angry Orchard established a home for cider research and development called the Innovation Cider House, located on a historic apple orchard in the New York Hudson River Valley. In May 2016, Angry Orchard planted three acres of traditional cider making apples at the Angry Orchard, which will be used for research and experimentation at the Innovation Cider House.

Angry Orchard makes a variety of year-round craft cider styles, including Angry Orchard Crisp Apple, a fruit forward hard cider that balances the sweetness of culinary apples with dryness and bright acidity of bittersweet apples for a complex, refreshing taste. Despite the recent growth of hard cider in the U.S., the category is still small and relatively unknown. Angry Orchard is committed to drinker education and awareness-building to help grow the category for all craft cider makers.

E.Z. Orchards have been orchardists since the 1920s when we began to grow Roman Beauty apples on the farm. When we began specifically producing cidre apples in 2000, the orchard was transformed around that intent and slowly took shape. Surrounding the orchards, the larger farm produces a wide variety of fruits that diversify the land and aid in the pollination process, including peaches, pears, and hazelnuts. Today, they grow a wide variety of heirloom cidre apples including French and English bittersweets, and American semi-sharps. In the Willamette Valley of Oregon where they farm, the ground is an ancient seabed full of rich and nutritious soil. With so much nutrition available to the trees, they have to suppress their vigor to ensure that each apple receives the most intense nurturing for flavor and aromatics. They grow our apples with specific cidre blends in mind. As visitors walk the grounds, it becomes clear that it’s organized around specific cultivation and harvesting techniques, enabling us to manage a precise maturation on the tree that they improve with every year’s lessons.

Sierra Nevada, Bell’s, Deschutes and More: Breweries and Wholesalers That Received Between $1 Million and $10 Million in Paycheck Protection Program Funding