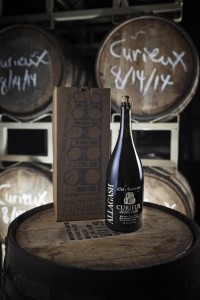 Portland, ME — The “curious” beer “Curieux” is turning 10 years old.

“In the spring of 2004 we decided to get a few freshly emptied bourbon barrels and try our hand at barrel aging beers,” said Rob Tod, founder and brewer at Allagash Brewing Company. “Curious about what would result, we decided to try our Tripel.”

The outcome was Allagash Curieux.

While the odd name still confuses many — at Allagash, they pronounce it “curio” — that hasn’t slowed people down from enjoying the beer.

“Among the hundreds of beers we’ve made, Curieux has had some of the most dedicated and passionate fans,” says Tod. “Now, we want to return the affection by inviting Curieux lovers everywhere to join us in celebrating 10 years of this unique beer.”

To commemorate a decade of barrel-aging beers, Allagash is releasing a special limited edition of 1,000 Curieux 1.5L Magnum bottles, hosting special barrel-aging events featuring rare Allagash beers, and running a video contest to win a free trip to the brewery in Maine.

Someone’s love for Curieux could win them a free trip to the brewery.

Consumers are invited to record and submit a video less than 3 minutes in length between October 15 and November 5 to enter the Curieux Vidieux Contesteaux[1].

“Tell a story, show your love for Curieux and inspire us,” said Tod. “We know how creative our fans are, and we can’t wait to see what they come up with.”

After all the entries are submitted, Allagash fans will be able to vote for their top 5 favorites on Facebook, and then a panel of judges will select the grand prize winner from this short list.

This grand prize winner will receive a free trip for two to the brewery in Portland, Maine, where they’ll have the opportunity to experience firsthand how Allagash makes Curieux.

The unique flavors of this beloved beer start with the making of the barrel in which it ages.

Barrels are charred on the inside before being filled with bourbon. After years of use aging bourbon, Allagash receives the newly emptied barrels, almost immediately fills them with fresh Tripel, and then stores the beer for another 6-8 weeks.

“During that time, the beer completely transforms,” said brewmaster Jason Perkins. “While the beer sits in those barrels, it takes on a lot of these “charred” oak flavors – vanilla, coconut, and a wide range of other flavors.”

Once the aging is completed, a small portion of fresh Tripel is blended with the oaked Tripel to round out the profile and liven up the aroma. The brewers at Allagash taste each batch and develop a custom blend.

“It takes time and effort, but to get consistency for the beer, we have to change the blend each time,” said Perkins.

The contest winner will be able to participate in this process – blending Curieux from barrel to bottle – in person.

“This should be an amazing experience for a few lucky fans,” said Tod. “It’s the first time we’ve ever been able to invite the public to come join in this moment.”

Allagash brews Curieux year round, and makes the beer available in 750ml bottles and on draft. But for such a special occasion, a special package seemed like a good idea.

To find a store near you that has one of these 1,000 bottles, visit Allagash.com/locator.

Throughout October, Allagash will hold special barrel-aging events in select markets across the U.S. featuring rare Allagash beers. Each will have an Allagash representative in attendance to talk about the beers and share stories from the past decade of barrel aging. In addition to Curieux, these events will be pouring James Bean (Curieux with the addition of cold pressed coffee), Odyssey (dark wheat beer aged for 10 months partially in new American Oak barrels) and Bourbon Barrel Black (Belgian-style stout aged for one year in Bourbon barrels).

To locate an event near you, visit Allagash.com/Curieux.

Allagash was founded by Rob Tod in 1995, and has grown from a one-man operation into one of the Top 50 Craft Breweries in U.S. (by sales volume) and a spot on Maine’s Best Places to Work list in 2013. Allagash brews Belgian inspired beers and is best known for its flagship beer, Allagash White. Allagash has won many national and international awards in its 19 years, and is viewed as a leader of innovative brewing techniques in the craft beer world. Being environmentally and socially responsible is a core value at Allagash, and they are constantly working to lessen the environmental impact of their operations. Allagash distributes beer in 17 states and DC.