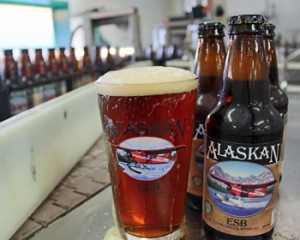 JUNEAU, Alaska — Alaskan Brewing Co. today announced the return of an award-winning beer that hasn’t come out of a bottle since 2008. Alaskan ESB has a 25-year history and is available once again as part of the Rotating Spring Seasonal release.

Starting in 1989, Alaskan ESB went through various limited releases, and in 1995 it was released as a year-round product called Alaskan Frontier Ale. “Frontier Ale quickly became the crew favorite as it was the hoppiest Alaskan beer that was available on a regular basis at that time,” says Alaskan Brewing Plant Manager Curtis Holmes.

That hoppy and balanced flavor was also more widely recognized, and Alaskan Frontier Ale – renamed Alaskan ESB in 1998 – won more than 20 national and international awards through the years, including three Gold Medals at the Great American Beer Festival.

Alaskan ESB is slightly darker and much hoppier than Alaskan’s flagship beer, the alt-style Amber. It has an exquisite copper color derived from Crystal malt that also gives the beer roasted overtones. ESB has a lively citrus bouquet and flavor and a crisp finish resulting from a generous blend of the finest quality Cascade and Centennial hops.

Another beloved element of Alaskan ESB is the floatplane artwork on the label. This year’s label honors the single-engine de Havilland Canada DHC-2 Beaver, which were produced from 1948 to 1967. The plane is a workhorse in the Alaskan backcountry, connecting communities to vital services and to each other. Many are now over 60 years old, but the Beavers continue to provide products like fresh Alaskan Beer to remote lodges, and the only access to the outside world for many small communities throughout rural Alaska, whether fitted with wheels, skis or floats.