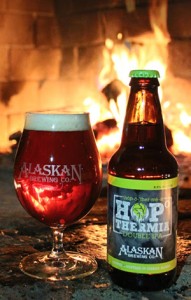 JUNEAU, Alaska — Alaskan Brewing Company’s newest year-round release is a bold Double IPA called Hopothermia, which will be sold in four-packs and on draft in all 15 states where Alaskan products are distributed.

In Alaska, a legend has grown around this big beer: The Legend of the Lone Brewer. Celebrated in verse, song, and a few questionable limericks — the tale lives on of the Lone Brewer creating a beer for the ages in order to hold back the very wilderness in which he lived. To accomplish this, legend has it that he called upon the many wild creatures who became his woodland friends for guidance and wisdom. And that influence can still be tasted in this beer today.

The strong malt backbone rests like a massive hibernating grizzly against the fierce wolverine strength of the hop profile. Like a moose in the forest, the strong hop flavors of Nugget and Apollo appear out of nowhere. Actually, they are added in the brew kettle to provide a green, floral aroma and citrus hop base. The later addition of Amarillo, Citra, and Centennial hops add notes of spicy grapefruit and orange, which might remind one of a friendly beaver. That could be a stretch.

Arctic poets were soon to sing the praises of this beer, famous now in the familiar verse:

There are strange brews made where glaciers cascade
By the brewers who know no bounds.
For they stuff in the hops ’til the temperature drops
And then call for a few more rounds.
In Alaska, it seems, every brewer dreams
of a bold Double IPA.
Hopothermia’s the beer, on the Last Frontier
That will keep the wild wolves at bay.

Hopothermia was first introduced in Alaskan’s Rough Draft series and after overwhelmingly enthusiastic response, a year-round offering was a natural choice. Hopothermia is the first 4-pack released as a Special Edition by Alaskan Brewing. The artifacts of the Lone Brewer have been faithfully recreated on the packaging, so that all may learn of his great struggle, and great achievement. No one’s going to argue that he might have gotten a little weird out there in the backcountry of remote Alaska, but the fact remains that Hopothermia is an awesome beer that reflects the rugged spirit of frontier Alaska.

As Alaskan Brewing Co. brewer Terwiliger Paige recently said, “Just because The Lone Brewer is a fictional character, doesn’t mean he didn’t brew an amazing beer. And we couldn’t be more excited to bring it to beer drinkers in this modern age, so far removed from the, admittedly, completely made-up world of the Lone Brewer.”

Hopothermia Double IPA pairs best with large wild game that you have caught with your bare hands. Also goes well with the big flavors of Thai food, sharp cheeses, bitter green salads and gourmet pizzas. Although, the Lone Brewer wouldn’t have known a gourmet pizza if it had hit him square on his backside.