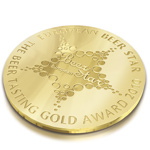 “It is thrilling to see our original styles continue to win big awards,” says Alaskan Brewing co-Founder Marcy Larson referencing the EBS wins, in addition to the recent silver and bronze medals awarded to Alaskan Pale and Alaskan Smoked Porter at this year’s Great American Beer Festival. “It is especially gratifying coming on our 25th year of operation. We can truly be proud that our classics have stood the test of time and remain at the top of their respective styles up to 25 years after they were created.”

According to the competition website, the European Beer Star’s panel of tasters sampled 1,113 beers from 38 countries to award gold, silver and bronze in 49 beer-style categories using purely sensory criteria to identify “authentic, distinctive beers of an impressive taste and quality.” This was a record number of entries for the eighth year of the competition and a nearly 30% increase in entries from outside of Germany.

The panelists judged the beer in early October, and the winning beers were announced at the Brau Beviale on November 10 in Nuremburg.

Alaskan Amber is a richly malted alt-style ale fermented at cooler lager-like temperatures to replicate the brewing practices of gold-rush era brewers in Alaska. Alaskan Stout is brewed with a unique blend of oats and malts to produce a balanced, smooth beer with hints of coffee and caramel.