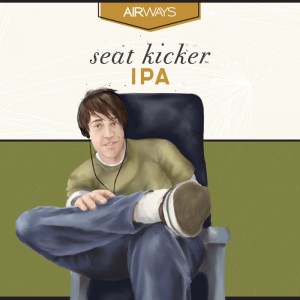 KENT, Wash. — Will it ever stop? Say hello to Seat Kicker, the newest IPA from Kent-based Airways Brewing. This delicious, Northwest-style IPA joins the brewery’s year-round draught and bottle line-up.

“Seat Kicker is a great addition to our existing lineup of delicious IPAs,” said Alex Dittmar, owner and head brewer at Airways Brewing Company. “We brewed a more citrusy, balanced, and lower alcohol beer that complements our more piney and bitter flagship Sky Hag IPA. This beer has a bouquet that won’t quit — which is how we developed the beer’s name and character.”

Airways once again tapped the talents of Washington artist Brett Nilsson to create the look of the Seat Kicker. Brett previously created the look of brewery’s “Sky Hag” and “Loud Lady” characters.

Seat Kicker IPA is a 60 IBU beer brewed with more than 24 pounds of Citra, Centennial, Simcoe, Columbus, and Cascade hops added to each 10-barrel batch. Deep gold in color with a strong hop flavor and aroma, this IPA is designed to be balanced and flavorful and comes in at 6.5% ABV.

The newest in the Airways series of annoying airline-related characters will make its debut in Alaska Air’s Seattle Board Room inside SeaTac Airport on May 1st, 2014 from 3-6 pm. Interested Board Room members that are not traveling that day can contact the Seattle Board Room at 206-392-9490 ahead of time for admission. “It’s great to see a company like Alaska, my employer for 13-plus years, believe in supporting local businesses and take an interest in locally made craft beer,” said Dittmar. Airways beer will be featured in the Alaska Board Room for the month of May.

The beer will be released on draft and in 22 oz. bottles at both Airways locations and in bottle shops around the Puget Sound area starting May 6th.

In addition to Seat Kicker IPA, craft beer enthusiasts can pick up the brewery’s flagship Sky Hag IPA and Chocolate Stout in 22-ounce bottles. Pre Flight Pilsner and PSA Summer Ale are available in 16-oz cans. Pints, tasters and growlers of all of these beers and more can also be found at the Airways Brewing Tap Room or Airways Brewing Beer & Bistro in historic downtown Kent.

Founded in Spring 2010, Airways Brewing Company is a growing microbrewery located in Kent, Washington. The brewery recently received a 2014 World Beer Cup┬« Silver Medal for its Belgian Dark Strong beer. Currently producing several year-round and seasonal offerings — including Sky Hag IPA┬«, Loud Lady IPA┬«, Pre-Flight PilsnerÔäó and PSA┬« Summer Ale — Airways Brewing also features limited edition and cask beers throughout the year. Pints, tasters and growler fills are available at the brewery’s Kent taproom, open Tuesday-Wednesday from 3-8 pm, Thursday-Friday from 3-9pm, and Saturdays from 3-7 pm (6644 S 196th Street, #T-100). Pints and delicious Northwest-style food can be found at the Airways Beer & Bistro in downtown Kent, Sunday-Thursday from 11 am-9 pm, and Friday-Saturday from 11 am-10 pm (320 W Harrison). Offerings from Airways Brewing can also be found in specialty bars, bottle shops and restaurants throughout the Puget Sound area. For more information about the brewery or Bistro, visitwww.airwaysbrewing.com.