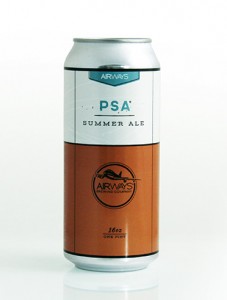 KENT, Wash. — Just in time for when the days get longer and warmer, Airways Brewing Company is releasing PSA Summer Ale. This bright, citrusy pale ale is available from now until the end of September in 4-packs of 16 oz. cans and on draught beginning Tuesday, April 8.

“Our summer ale has a slightly new name, but is the same flavor-packed pale as last year,” said Alex Dittmar, founder and head brewer at Airways Brewing Company. “At 4.8% ABV, it’s the perfect beer to take along with you to a barbecue or on a hike.”

PSA Summer Ale is an easy-drinking beer featuring loads of Cascade and Centennial hops, which give the beer a sweet, citrusy flavor and smell. A touch of flaked oats add a slight creaminess. At 30 IBUs and 4.8 percent ABV, it’s a great beer for the long spring and summer days.

Beginning Tuesday, April 8, PSA Summer Ale will be available in 4-packs of 16 oz. cans at both Airways locations for $10.50. 4-packs will also be available throughout the Puget Sound region at select specialty bottle shops.

For more information about Airways Brewing and its selection of handcrafted brews, be sure to follow Airways Brewing Company on Facebook,Twitter,Instagram, or visit www.airwaysbrewing.com.