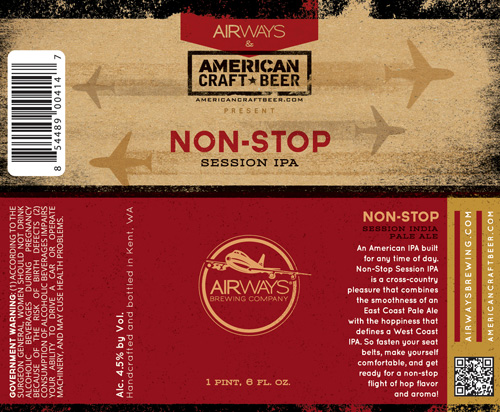 KENT, Wash. — Get ready to go cross-country with a new, limited-edition collaboration from the Kent-based brewery’s expanding line of delicious handcrafted beers.

“We’re excited to have the opportunity to work with the great folks from AmericanCraftBeer.com,” said Alex Dittmar, owner and head brewer at Airways Brewing Company. “We all agreed that we wanted a very drinkable beer that combined the best characteristics of IPAs from both coasts. I think this beer does that very well.”

“We’re huge fans of Airways Brewing and we love what they’re doing so we jumped at the opportunity to work with them” said Tom Bobak, Editor-In-Chief at AmericanCraftBeer.com. “I’m not sure that a collaboration between a national craft beer news & lifestyle site and a brewery the caliber of Airways has ever happened before and I’m so excited that they asked us to be part of this.”

The Non-Stop Session IPA was brewed with Amarillo, Centennial, and Simcoe hops. Deep copper in color with a big citrus and pine hop aroma and flavors, this American IPA blends the smoothness of an East Coast Pale Ale with the hoppiness that defines a West Coast IPA.

A release party will be held on September 5th from 5-7 pm at the Airways Brewing Co. Tap Room in Kent, WA. East coast event details will be announced soon. Beer lovers around the country are invited to participate at any time in a coast-to-coast toast via Instagram and Twitter by posting photos with the hashtag #NonStop.

In addition to the Non-Stop Session IPA, craft beer enthusiasts can pick up the brewery’s flagship Sky Hag IPA and Chocolate Stout in 22-ounce bottles. Pre Flight Pilsner and Oatmeal PSA (Pale Session Ale) are available in 16-oz cans. Pints, tasters and growlers of all of these beers and more can also be found at the Airways Brewing Tap Room or Airways Brewing Beer & Bistro in historic downtown Kent.

Founded in Spring 2010, Airways Brewing Company is a growing microbrewery located in Kent, Washington. Currently producing several year-round and seasonal offerings — including Sky Hag IPA┬«, Chocolate Stout, Pre-Flight PilsnerÔäó and Oatmeal PSAÔäó — Airways Brewing also features limited edition and cask beers throughout the year. Pints, tasters and growler fills are available at the brewery’s Kent taproom, openTuesday-Wednesday from 3-8 pm, Thursday-Friday from 3-9pm, and Saturdays from 3-7 pm (6644 S 196th Street, #T-100). Pints and delicious Northwest-style food can be found at the Airways Beer & Bistro in downtown Kent, Monday-Thursday from 11 am-9 pm, Friday-Saturday from 11 am-10 pm, and Sunday from 11 am-7 pm (320 W Harrison). Offerings from Airways Brewing can also be found in specialty bars, bottle shops and restaurants throughout the greater Seattle/Tacoma area.