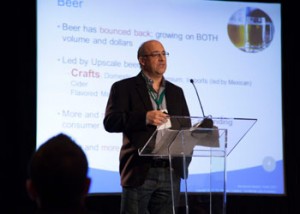 But Danny Brager, the head of the beverage alcohol group for A.C. Nielsen Co., dug deeper into the topic during the Nov. 29 Brewbound Session in San Diego as Danny Brager, presenting a slew of craft-focused data slides to attendees.The new layer he reached is that craft beer is helping create a new level of retailer interest in beer sales.

The real story, according to Brager, isn’t about how much beer is being sold, but where it’s being sold.

“There are a lot of additional retailers selling beer that didn’t before,” he said.

According to Brager, there are nearly 50,000 outlets — both on-premise and off-premise — selling “some beer” that weren’t three years ago. Much of that growth is coming from retailers that might have already offered beer at a number of their locations but that have begun to sell it either at existing outlets that hadn’t previously been in the beer business or at newly-opened locations licensed to sell alcohol products.

And an outsized percentage of those sales are coming from craft, Brager said. For the 52-week period, independently owned craft beer sales are up 17.4 percent, or $292 million, at Nielsen-tracked off-premise retail outlets. (Nielsen measures about 70 percent of off-premise retailers nationwide with regard to beer, Brager noted.)

“People are still gravitating towards higher priced beer and showing that they are willing to pay a premium for good craft beer,” he said, noting that the average case price of craft is up 18.2 percent to $32.45.

Given the outstanding numbers, Brager helped to put things in perspective, comparing the growth of the beer category to other Nielsen-tracked channels.

“I think we get a bit spoiled by these numbers,” he said. “If we look at the other 120 categories that Nielsen measures, two-thirds of them are actually declining. Don’t take it [the growth] for granted. We are in a good place on a relative basis.”

Brager also pointed out that 1,400 new craft SKU’s — accounting for $167 million in annual sales — now exist in the Nielsen database. He broke down a few of the craft SKU’s performing well, noting that Seasonals and hoppy styles account for 50 percent of the craft beer dollar share and are up 25.2 percent and 24.8 percent respectively. Pale, classic styles account for 10 percent of the segment dollars, while Belgian styles own 9 percent.